when new Super Bowl events are added in your area.

Reviewed and authenticated by the NFL.

Reviewed and authenticated by the NFL.

Super Bowl 55 is the culmination of the 2020 NFL season, with the game taking place on February 7, 2021 at Raymond James Stadium in Tampa, home of the Tampa Bay Buccaneers. The game will pit the winners of the AFC Championship and NFC Championship games against each other, in a contest that will determine the NFL's champion for that season. The Super Bowl is always played on the first Sunday in February, and has become something of a national holiday, as it is the most watched television program every year in America, with commercial airtime going for millions of dollars for each 30-second block.

How much are Super Bowl tickets?

The secondary market is the best place for fans to realistically purchase tickets. Generally speaking, the average Super Bowl ticket costs between $4,000 and $5,000, but that price varies depending on the particular matchup and when the tickets are purchased. The price of Super Bowl tickets typically falls as the event nears, but ticket prices shift significantly once the matchup is determined.

Below is some price information for tickets to recent Super Bowls. 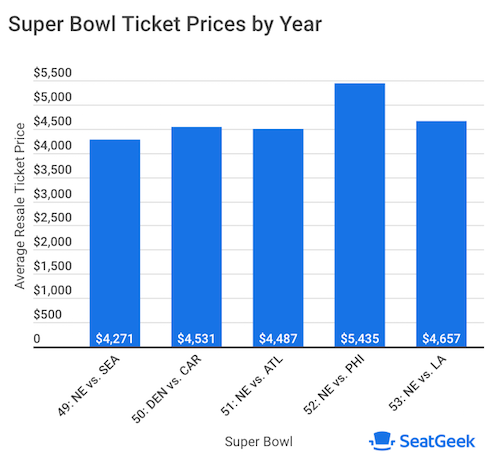 Where is the Super Bowl?

The 2021 Super Bowl will be played at Raymond James Stadium in Tampa, FL.

Where are the future Super Bowl locations?

Here are the Super Bowls locations for the next next four years :

How to get Super Bowl tickets?

Super Bowl tickets are consistently the most in-demand ticket in all of professional sports. While some fans are able to buy tickets through their team or NFL On Location Experiences, the vast majority of fans attending the game turn to the secondary market for tickets. The secondary market, or resale market, means the ticket is not being sold directly from the original source, and that the price point is dictated by demand for tickets rather than the original, face value cost.

How to get Super Bowl packages?

When it comes to Super Bowl tickets, packages can mean a number of things. Some come with hotel rooms, while others come with pregame parties or tailgates. Fans looking for packages can find some available through NFL On Location Experiences.

For a complete list of football games, visit our NFL tickets.

The first Super Bowl was played in January of 1967, when the Green Bay Packers defeated the Kansas City Chiefs by a final score of 35-10. Since then, the game has grown into one of the most beloved American traditions, and a bucket list event for many sports fans.

Only one team has managed to win six Super Bowls, with that honor going to the Pittsburgh Steelers, who have won six of their eight appearances in the big game. The New England Patriots, Dallas Cowboys, and San Francisco 49ers are all just behind the Steelers with five titles, while the Green Bay Packers and New York Giants have four Super Bowls each.

When it comes to memorable Super Bowls, there aren't many more memorable than the clash between the New York Giants and New England Patriots in Super Bowl XLII. The Patriots came into that game with an 18-0 record on the season, led by a record-setting offense with Tom Brady at quarterback and the legendary Randy Moss breaking records at wide receiver. New England entered that game as a double digit favorite, but the Giants did not follow the script.

Led by a ferocious pass rush headed by Pro Football Hall of Famer Michael Strahan, the Giants defensive line pressured Brady time and time again, with the Giants pulling one of the greatest upsets in NFL history. On a late Eli Manning touchdown pass to Plaxico Burress, the Giants won the Super Bowl while ruining the Patriots' perfect season.

Other memorable Super Bowls include the Patriots' massive comeback and overtime win over the Atlanta Falcons in Super Bowl 51, the only overtime game in Super Bowl history, as well as New England's last minute goal line interception by Malcolm Butler to seal the championship against the Seattle Seahawks in Super Bowl 49.