Under third year head coach Jimbo Fisher, Florida State is once again back in the national spotlight as a top-ten team looking to grab headlines this season. Although in recent years the program has not experienced the same level of success as it did during its unstoppable regime in the 1990s, Fisher believes that this year could be a turning point. The team returns a host of starters from last year’s 4th ranked defensive unit–including standout defensive end Brandon Jenkins–and will look to capitalize on its experience to stomp opponents this season. On the offensive side of things, EJ Manuel returns as Florida State’s senior playmaker and, barring serious injury, is poised to become one of the school’s all-time offensive leaders. Physically and mentally invigorated, Fisher and his squad are embracing expectations as they prepare for this weekend’s season opener against Murray State.

So, what does the preseason hype mean for Florida State ticket Prices? Take a look at the data we compiled: 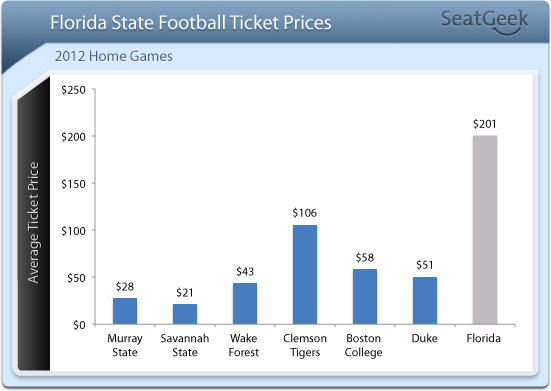 For tickets to these and all other college football games, make sure to check out SeatGeek.