Update (9.3.14): ‘Fish in the Dark’ — a comedy about a death in the family, featuring a character very similar to Larry David himself (shocking) — will begin previews at the Cort Theatre on February 2. Opening night will take place on March 5, led by a cast including David, Jayne Houdyshell, Jonny Orsini, Jerry Adler, Jake Cannavale and Rosie Perez.

Move over, Woody Allen: there’s a new neurotic Jew on Broadway (I’m a Jew so I can totes say that). Cultural icon Larry David has penned, and agreed to star in, a new play called Fish in the Dark. Rumors began swirling about the project back in January, when Showbiz411 broke the news the David and Seinfeld were working on a “mysterious project” together. While it’s not known if Seinfeld is still involved (*fingers crossed*), Book of Mormon producer and EGOT-wielder, Scott Rudin, has signed on as producer. 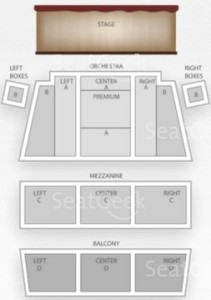 Check back for more news as it unfolds. In the meantime, here’s a clip of Larry David talking to Brian Williams about how much he hates social interaction.