An Introduction to Tailgating: Food and Party Ideas and Ticket Prices

If there is one activity that truly defines the American experience when it comes to sports, it’s tailgating. And quite frankly, there is nothing in the world that compares to celebrating with hordes of fellow team fanatics in the stadium parking lot before the big game. So for those of you who are still trying to grasp the idea of tailgating, or need a refresher, we at SeatGeek have compiled a guide to help immerse you in this timeless American tradition.

The origins of this time-honored tradition date back all the way to the Civil War, specifically The Battle of Bull Run, when civilians from the Union would gather and celebrate, prior to each battle, as a means of building troop moral and spurring their side to victory. This concept of celebrating also conjoined eating and drinking to the act of motivating.

Tailgating was then first applied to competitive sports in 1869 during the inaugural football game between Princeton and Rutgers, whereby students from the latter gathered before the game and coordinated to all wear school-color scarves (converted into turbans) in order to symbolize their support/loyalty to their alma mater. After this exhibition, students from other schools took notice and followed suit, leading football to be the first sport to adopt tailgating as part of its culture. Soon after, the tradition begun spreading to other sports, both at the collegiate and professional level, including basketball, hockey, soccer and baseball before eventually branching out to concerts. At last, modern tailgating was officially born.

Through its evolution during this past century, tailgating, as it is known today, has three general main purposes:

So whether you are there to support your team, consume copious amounts of burgers and beer, participate in the insanity and comradeship or simply to observe the sporting event itself, tailgating offers something for everyone.

Here are some interesting facts to blow your mind:

However, needless to say, tailgating is an art. In order to help you perfect your proficiency, we have compiled a list of tailgating must-haves / must-dos. Just remember to arrive a few hours before the commencement of the game to set up and get settled!

Don’t expect any sit-down gourmet meals at the location – it’s all about whatever delicacies you can grab with your hands or eat messily with plastic silverware. The mainstays include the following:

You weren’t seriously expecting to enjoy a full-blown tailgate just by bringing yourself and plastic bags filled with food were you? The following items are essential to creating the perfect tailgate setting:

At it’s core, a tailgate is also a party (in a parking lot), not just someplace you go to eat food or mingle with fellow fans. As such, the following activities will serve you well in boosting the surrounding “funness”:

Avoid the following at all costs:

Given the prominence of this American tradition, we here at SeatGeek decided to investigate if there is a correlation between tailgating experience/quality and ticket prices – that is, do teams that have more a “renowned” tailgating experience also have higher ticket prices? After all if die-hard fans are going nuts at these tail gates, then there is a possibility that they are also willing to shell out more money to witness the game in-person.

Using our proprietary ticketing data combined with some help from Bleacher Report in ranking the “NFL’s Best Tailgates”, we can look into whether this correlation is indeed true.

According to a 2011 report from Bleacher Report, below are the top 5 teams with the best tailgates:

We then calculated the average ticket prices for these teams over the course of the 2010-2012 NFL seasons to determine if there is indeed a trend between these two variables. 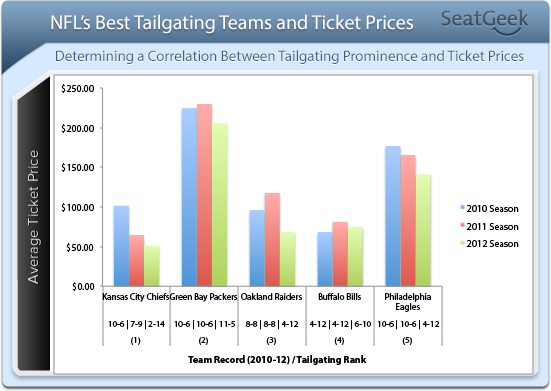 Unfortunately it does not appear to be the case that a better tailgate experience equates to higher ticket prices. Although word around the streets is that the Kansas City Chiefs do indeed possess one of the craziest tailgating experiences in the NFL, Chiefs fans aren’t willing to consistently pay higher ticket prices to be inside the stadium. Rather, in observing the data, it appears that tickets prices are more correlated with the team’s overall record. 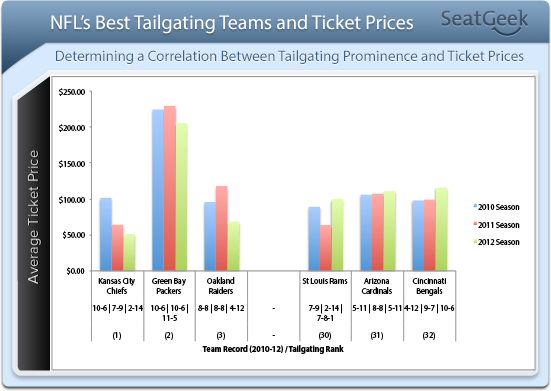 The evidence is clear: No matter how fun/crazy a team’s tailgates are, it does not guarantee higher ticket prices. As our data shows, NFL teams on the bottom end of the tailgating spectrum have equally or higher ticket prices than their counterparts on the top end.