This Saturday signifies the beginning of a new era for Texas A&M as the team makes its SEC debut against the 24th ranked Florida Gators in front of a sold-out crowd at Kyle Field. It also marks Kevin Sumlin’s first game as A&M’s head coach and the first time since 1967 that the Aggies will open their season against a conference opponent. Factor ESPN’s College GameDay crew into the equation, and the atmosphere in College Station will undoubtedly be electric.

Not surprisingly, the average ticket to see A&M take on Florida stands at $260 on the secondary market–the most expensive conference home opener of any team in college football this season.

Take a look at some other ticketing trends regarding this weekend’s SEC showdown: 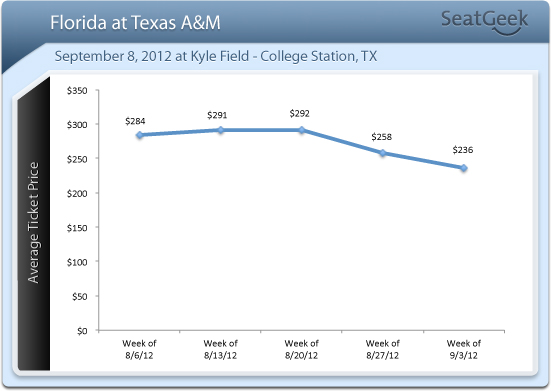