Serves up for 2012 US Open Tennis Tickets

With 26 different sessions, grounds passes, two stadiums, and men’s and women’s competitors galore, navigating the US Open can be a bit overwhelming. That’s why SeatGeek is here with a fan guide to attending the many tennis matches of the Open. We looked at information from 60+ secondary ticketing markets to find out how much people are paying for US Open tickets. By using this data, we created a ValueScore metric to help fans figure out how to best spend their money. And with the average ticket for this year’s US Open at $280, which is 26% higher than last year’s price, there is plenty at stake.

This Year’s Most Expensive Events

If you’re hoping to see the later rounds of the men’s tournament, be prepared to spend serious cash. The men’s later rounds of the tournament accounted for the four most expensive sessions of the US Open on the secondary market. The priciest event in the US Open shouldn’t come as a surprise: the Men’s Final matchup came in at $546 per ticket. That was followed by the Men’s Semifinals at $464, and the two quarterfinal sessions round out the top 4. 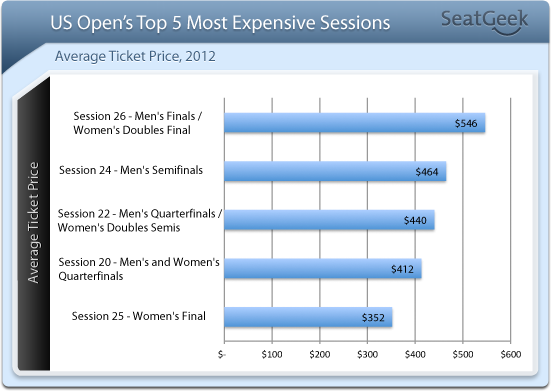 Tickets to see the women’s matches, meanwhile, sold for far lower prices than the men’s matches. Most tickets are for sessions with both men’s and women’s matches, so it’s hard to differentiate whether fans are paying to see the male or female competitors. But a ticket to see the Women’s Singles Final session, which has no men’s match along with it, is just the 5th-most expensive session overall at a price of $352 per ticket. That means fans value the men’s two quarterfinal rounds, semifinals round, and final all higher than the Women’s final. The numbers show that it’s no doubt that the men’s tournament is the biggest draw for fans.

A ticket for the Open gives fans the opportunity to watch not a specific match but a full session. Morning sessions, which begin at 11 a.m., typically see three separate matches, while evening sessions consist of two matches. Events during the day averaged $301 per ticket, while night events cost $235. So while the day events are more expensive, they provide more than those at night.

In a nod to SeatGeek’s DealScore metric, which attempts to quantify the value of a ticket deal, we devised our own metric to answer the US Open’s vexing question: Which US Open session is the best deal? We looked at a number of factors, including the number of matches per session, the round of the session, the quality of competitors, and the average ticket price. We then combined those numbers to form a ValueScore on a 1 to 100 scale.

The best US Open deal, with a ValueScore of 99, is the daytime Session 21 on September 6th. Fans at Arthur Ashe Stadium that day see a double-whammy of exceptional singles play in the Men’s Quarterfinals as well as a championship in the Mixed Doubles Finals, all for a price of $259 per ticket. Between a final matchup with a trophy on the line and men’s singles play featuring seeded competitors, Session 21 has the best bang for your buck.

Two other sessions stand out with excellent ValueScores above 90. Session 17’s average price of $189 is quite low for its position in the tournament, and it is cheaper than sessions on the five days before it and five afterward. The September 4th daytime session features the Men’s Round of 16 and Women’s Quarterfinals, and so is a good buy for seeing a wide range of competition for cheap prices. In addition, Session 23 on the 7th notched a 91 ValueScore by combining a Men’s Doubles Final with the Women’s Semis, and is the best bet to see Serena, Azarenka, or Wozniacki for a price of $300 per ticket.

The ValueScore metric can not only find the best deals, but it points out the sessions selling for disproportionate prices. The final day of the US Open, featuring finals for the Men’s Singles and Women’s Doubles tournaments, notched a 60 ValueScore because of its too-high $546 average ticket price. Fans seem to be paying more for the event because they can say “I was there when,” even though in our analysis the price does not match the event. The same can be said of the Men’s Singles Semifinals, which, with a 46 ValueScore, is unable to match its $464 ticket average.

Overall, ticket prices for the 2012 US Open have been much more expensive than last year’s Open. The average ticket to a US Open session this year comes in at $280, a 26% raise on last year’s $223 per ticket. The many storylines surrounding this year’s Open partly explain that rise. Will Serena continue her dominant streak? Is Federer still able to dominate? Can Murray push his way into the Big Three players of tennis while Nadal rests his balky knees? Fans are snatching up tickets for expensive prices to find the answers to these pressing questions. 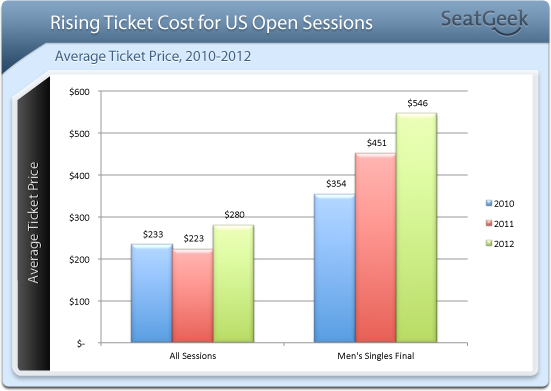 The price of the men’s singles final has risen quite dramatically from the past two years. A ticket to see 2010’s Men’s Singles Final cost an average of $354, and 2011’s was priced at $451 per ticket. This year, though, the price has jumped all the way to $546 for the last day’s session, which includes both the Men’s Singles and the Women’s Doubles Final, making it particularly in demand. Altogether, the final session’s ticket price rose 54% over the past two years, indicating rapidly growing interest in the event. Tickets for this year’s final session are widely available, ranging from $190 for a seat in Section 324 to $7502 for front row sideline seats in Section 49.

Interestingly, the escalating price of the men’s singles final has only slightly translated into rising prices overall (see graph). For example, between 2010 and 2011, despite the almost $100 jump in price for an average ticket to the men’s final, the average cost of a ticket to any session actually decreased from $233 to $223. This means that although the high-profile event of the men’s final is growing more expensive, most tickets stayed at relatively the same price. Essentially, the price growth for the spotlighted Men’s Singles Final hasn’t translated to other matches of the US Open.