Since 1905, Stanford and USC have been rivals.

Although their disdain for one another softened during the early 2000s, Jim Harbaugh’s 2007 arrival in Palo Alto helped refuel the mutual hatred between the two teams. Although Harbaugh is now the head coach of the San Francisco 49ers, the lasting impression he left on his former squad remains in tact. Thanks to him, the Stanford-USC rivalry is once again at the forefront of Pac-12 fans’ minds.

USC’s recent disappointment suffered at the hands of Stanford–including an embarrassing 55-21 romp in 2009– has unquestionably added to the rivalry drama. This year when Lane Kiffin’s Trojan team heads to Stanford, it will be looking to avenge three straight losses in the series. As suspense continues to rise, ticket prices for the game remain high. The sold-out game is one of the toughest tickets in college football this weekend, with the average seat selling for 142.40.

Take a look at the numbers: 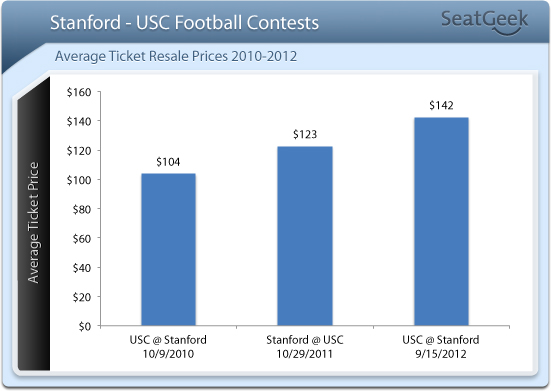 For the best deals on all college football tickets, make sure to check out SeatGeek.