‘At The Drive In’ announce reunion after 11-year split, join Coachella 2012 lineup

The post-hardcore El Paso rockers once known as ‘At The Drive In’ tweeted a vague message to fans yesterday alluding to the group’s reunion. The band split in 2001 following the success of their third album Relationship of Command, where frontman Cedric Bixler-Zavala and guitarist Omar Rodríguez-López left to form ‘The Mars Volta.’ After 11 years of what the band referred to in 2001 as an ‘indefinite hiatus,’ most of the personal issues between the group’s core members seemed to have been worked out. 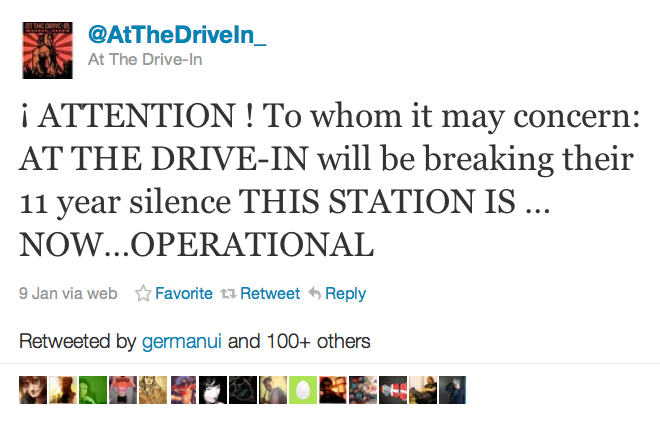 Now the band has been added to the Coachella 2012 lineup and will perform during the festival’s final day alongside acts like Dr. Dre and Snoop Dogg, Justice, Florence and the Machine, AVICII, La Roux and Girl Talk. Renowned for their incredibly vibrant live shows, it should be interesting to see how the band’s performance style has changed since the break. Also reuniting and performing at the festival will be Swedish hardcore punk band, Refused. Click here for more information on the entire 2012 Coachella lineup.

At The Drive In performing Live at Big Day Out 2001 in Sydney.