Tickets to the 2012 Burning Man Festival are now available! Get yours quick before the prices continue to rise. Right now, tickets to the 26th annual week-long community are going for a stunning average of $1043.85 and are starting at $947.

What Is Burning Man?

According to the official site, at Burning Man “tens of thousands of participants gather in Nevada’s Black Rock Desert to create Black Rock City, dedicated to community, art, self-expression, and self-reliance. They depart one week later, having left no trace whatsoever.” Last year, the event was capped at 50,000 attendees and tickets sold out in July. Burning Man likes to call its attendees “participants” rather than fans, as there are no standard acts and stages like at a typical festival. Instead, Burning Man considers itself a “city” where the participants create the content themselves. This year’s theme is Fertility 2.0. If you want to learn more, check out Burning Man’s First Timer’s Guide.

Every year, a giant statue of the Burning Man is constructed at the festival. Last year, the man stood 104 feet or 32 m tall from top to ground. How tall with the Burning Man be this year?

Borrowing a page out of the BCS Championship Game tickets playbook and are implementing a ticket lottery system for the 2012 festival next summer.

Start date: The 1st wave of The Burning Man lottery starts today on 11/28/2011
End Date: The 1st wave of the lottery ends on 12/11/2012
Available tickets: 3,000
Burning Man Ticket Prices: $420 each, up considerably from last year where the tiers ranged from $210 – $320. This price rise makes sense though considering tickets quickly sold out and ended up going for as high as $1,000 on the resale market.
Lottery Type: Random lottery
Notification Date: December 19, 2011

For those that don’t get tickets in either of the two lotteries there will be an additional allotment of 10,000 tickets sold for $390 a piece on a first-come, first-serve basis starting in March.

Click here to get tickets to the sold out Burning Man Festival 2011!

The 25th annual Burning Man Festival has sold out for the first time since its inception in 1986. Burning Man is a week-long festival that takes place each year from the Monday before Labor Day until Labor Day in Black Rock Desert, Nevada. The event has been described by the New York Times and the Los Angeles Times, as an “experiment in community, radical self-expression, and radical self-reliance.” The event gets is name from the burning of a large wooden sculpture of a man, which takes place on Saturday evening.

The Burning Man website has stated the following as their reason for the event selling out:

“The Bureau of Land Management (BLM), which oversees the Black Rock Desert National Conservation Area, requires us to manage growth in line with the previous year’s population in order to comply with our use permit. As a result, Burning Man has exercised its oft-stated right to cap ticket sales.”

They go on to tell people that tickets will not be sold at the gate, and not come to Black Rock City without an event ticket. Additionally, they state that Black Rock Desert is a “remote, inhospitable environment with limited resources, minimal facilities, and few camping opportunities in the vicinity.” Burning Man concludes its news post by stating that camping will not be permitted anywhere around the event site, and that the closest campgrounds are over an hour drive away.

Burning Man Festival 2011 will take place August 29 through September 5 this year. For those of you who are going, make sure to drink plenty of water to stay hydrated, be safe, and have a blast! 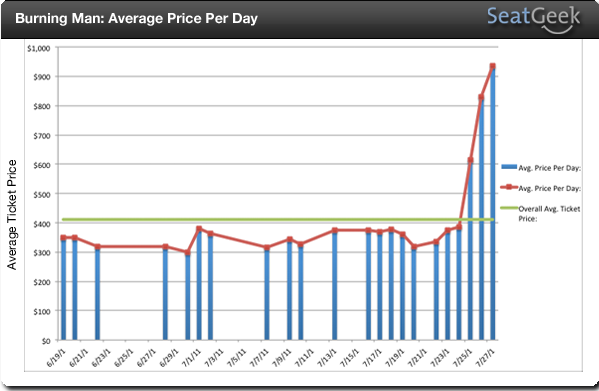 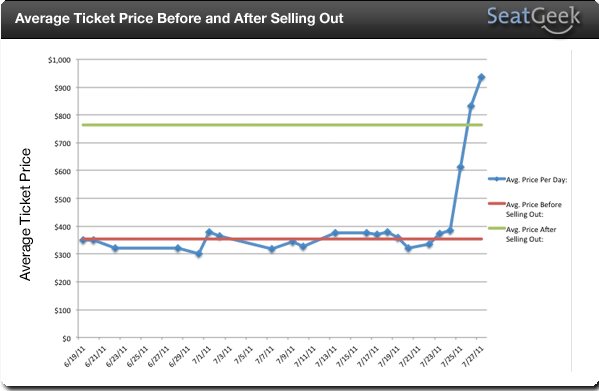 Finally, SeatGeek took a closer look at the change in ticket prices from July 24 to July 25. Previous to the festival selling out, the highest priced face value ticket for Burning Man 2011 was $320 for the fourth and final price tier. On July 24 (the day before tickets sold out), Burning Man tickets were already selling for more than the $320 face value, with the highest priced ticket being sold for $425, and the average ticket selling price being $386. When word got out that Burning Man sold out the next day, July 25, nearly six times as many tickets were sold on the secondary market as the previous day with the maximum price being $879, and the average being $614. This is about a 207% increase in the highest priced tickets sold, and a 160% increase in the average ticket price. This data can be seen in the graph below. 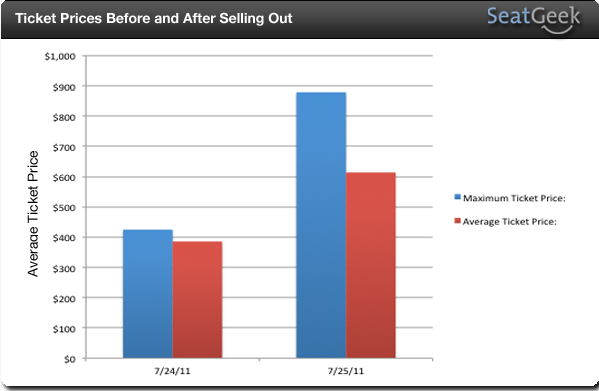 Since Burning Man Festival 2011 has sold out, the highest selling price of a ticket  was $1,198, with the transaction occurring on July 27. As of July 28, there are no Burning Man tickets on sale in the secondary market that are less than $1,000. If you are trying to make it out to the playa of Black Rock for Burning Man, and you don’t already have a ticket, be sure to check out SeatGeek to find the cheapest tickets available online.

The Playa of Black Rock Desert During Burning Man (Photo Credit:WKHarmon via flickr)

Check out SeatGeek to find the best deals on Burning Man 2011 tickets.