Prices for 3-day passes are higher this year than they’ve ever been for Coachella, but there’s been an unprecedented spike in prices for the first weekend over the past two days. Today, festival goers have paid an average of $1,893 for a first-weekend pass — more than double the $842 average just two days ago, and more than 4x the cost of a 3-day pass on the Thursday before last year’s first weekend ($439).

As of 4:45 p.m. EST yesterday, the cheapest pass available for the first weekend is listed at $2,175. It seems as though buyers have been waiting for sellers to drop their prices into the $1,500-$2,000 range before buying, but it’s still been staggering to see the huge spike in prices this week.

The average 3-day pass price for the first weekend has jumped 125% in the last two days from $842 to $1,893. Inventory has shrunk to the point where there are now fewer than 40 first-weekend passes on the secondary market; at the beginning of the week, there were about 130 passes on the market. 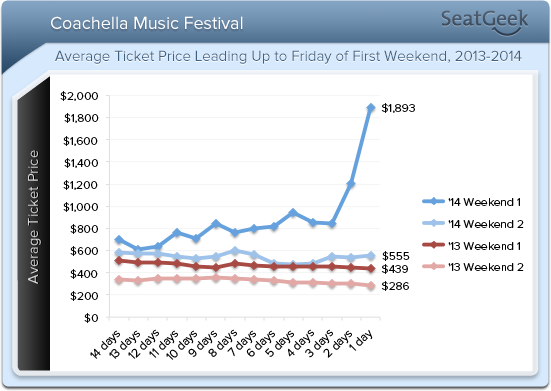 There’s also far more inventory on the resale market for the secondary weekend — about 350 passes, or 10x the amount still listed for the first weekend. Given the healthy number of passes still out there, it’s likely prices for the second weekend will continue to fall into next week.