Along with 2018 dates, Coachella organizers announced yesterday that ticket prices for next year’s event would be increasing.

With the new ticket cost, general admission passes are now $429 and VIP will be nearly $1,000 (OK, $999). This doesn’t include car and tent camping which is another $113. Or, because does anybody even camp at Coachella anyway, you’re looking at hundreds for a hotel room plus however much it’ll cost to get to and from the festival each night.

In previous years, attendees could acquire a GA Coachella pass for $399 and a VIP pass for $899. While definitely not a “cheap” festival ticket, the cost was still significantly less than it would be to see those first and second-tier performers individually.

However, a recent in-house analysis that explored the value of the country’s top festivals found that when looking at ticket price + lineup, Coachella did not provide the highest value. In fact, it ranked at number nine on the list of overall best bang-for-your-buck event. 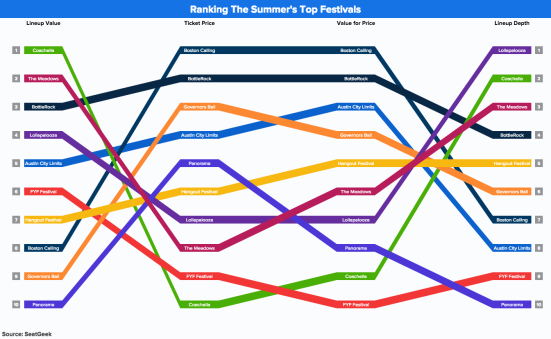 All this has us thinking: Is Coachella really worth all that money? For folks living in Southern California, maybe. But for the rest of the country, maybe not. Even West Coasters residing north of Los Angeles might consider BottleRock festival, which ranked number two on our overall best bang-for-your-buck list and often has one of the most unique lineups every year.

Another financially feasible option for East Coasters is Boston Calling, which has the cheapest ticket prices and features many of the same second and third-tier performers that Coachella wrangles in every year. Even Austin City Limits, which–in its ridiculously massive lineup–has tons of performer overlap with other popular festivals.

Also consider that Coachella headliners historically go on to announce summer tours following their performances. Both Kendrick Lamar and Lady Gaga are hitting the road this summer, with longer and more intimate setlists than what fans got in the desert.

Suffice it to say, if you’re looking for an amazing live music experience and don’t feel like paying for a Coachella ticket (and by “don’t feel like” I mean “can’t afford because you’re still paying back this year’s Coachella ticket on your credit card”) you don’t have to. There are plenty other more affordable options closer to home that will provide you with a similar lineup and just as many cool Instagram photos.