Still Want to Go to Coachella?

Less than a month to go until the first weekend of Coachella and hopefully you have your tickets. But if not, we’re here to help you out at SeatGeek to find the best deals on tickets to the desert event and unofficial kickoff to the summer music festival season.

Coachella 2011 sold out in six days. Things were so much simpler back in 2010. Coachella 2010 didn’t sell out until three days before the festival. Getting tickets to Coachella was far down the list of your summer festival concerns. Flip flops were of high importance, however.

With the quick sellout of 2011’s festival, an unprecedented demand due to a perfect storm of reasons sent prices on the secondary market skyrocketing for those eager to hang out in Indio last April. 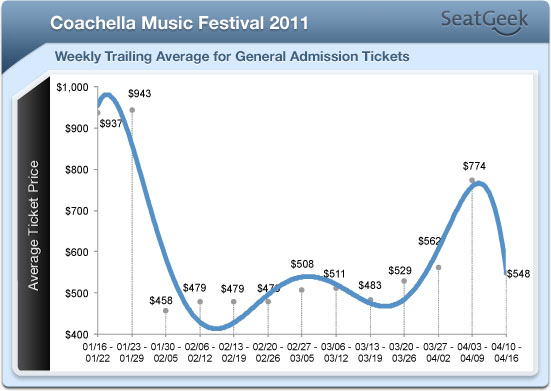 Prices took off again once the two weeks leading up to Coachella 2011, with passes sold at an average of $645.40(twice face value) on secondary markets.

Just like last year, prices bottomed out about a month after tickets sold out. Demand was overwhelming during the first week of the sellout, with prices 102.64% and 83.13% above face value for weekend one and two, respectively. At their cheapest, tickets were 20.28% and 24.14% less expensive that its peak for weekend one and two during the week of January 29th until February 5th. 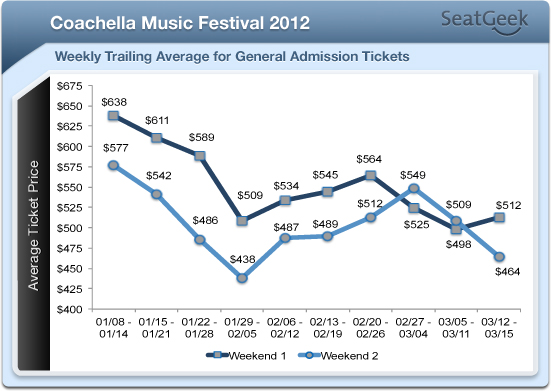 If last year is a point of reference, tickets will start to go up beginning this week, right until the last week before the show. 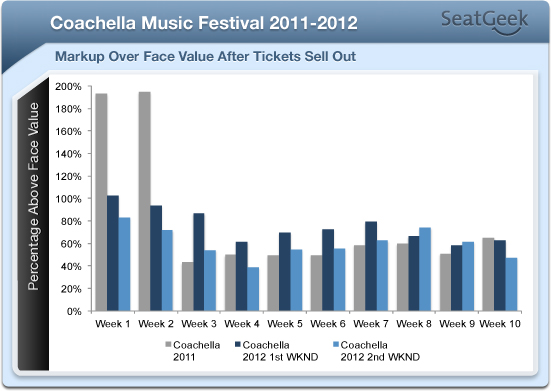 Aside from the first crazy weeks of last year, both weekends are on par with average markup based on last year’s ticket prices.

With prices correlating strongly week to week, now’s the time to buy tickets is now before they spike up again.