Outside Lands Music & Art Festival will return to Golden Gate Park for the eighth year in a row this weekend.

Saturday’s show, which features performances by The Black Keys, Billy Idol, Kendrick Lamar and many more, is the most expensive, with an average resale price of $217. This is slightly above the $200 average fans are paying to see Elton John, Sam Smith and others on Sunday. Fans looking to attend the festival but save some money should check out Friday’s show featuring Mumford & Sons and Wilco, which only has a resale price of $172. 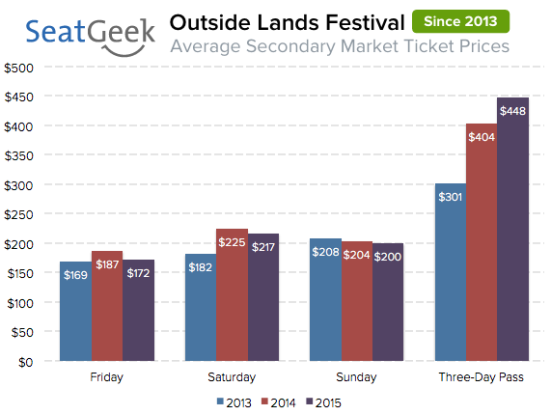 While the crowd will be full of locals, music fans from across the state of California are interested in buying tickets. Of those looking to buy tickets to the show on our site 48 percent live in the San Francisco Bay area. The second biggest swatch of music fans comes from Los Angeles, where 19 percent of those looking for tickets live. Fans in Sacramento (3 percent), Fresno (3 percent) and San Diego (2 percent) have also expressed interest.

Fans who are looking to attend all three days should opt for the three-day pass, which is currently reselling for $142 less than the combined cost of three individual tickets.

10 Tips: An Insider’s Guide to Outside Lands Music Festival