Late last week, we saw ticket prices for the first weekend skyrocket to nearly $2,000 a piece on average as the number of tickets available for resale shrank from hundreds to dozens. While the second weekend is considerably more affordable than that (as is the norm at Coachella each year), ticket prices have still spiked from where they were a week ago, and this year’s second weekend is almost 2.5x more expensive on average than it was in 2013.

After that huge spike late last week for first-weekend passes, the average price for the second weekend jump 27% from $530 on Friday to $673 on Saturday, suggesting that a lot of folks who weren’t able to find (or couldn’t afford) a ticket for the first weekend decided at that point to buy for weekend two. That same phenomena occurred last year, but it wasn’t to the same degree; prices for the second weekend of the festival rose 17% from $264 on the Friday of the first weekend to $309 on Saturday. 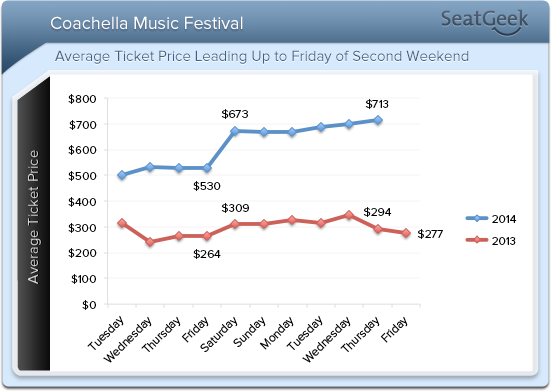 Yesterday, the average price paid for a weekend two pass has been $713, which is almost 2.5x the $294 average price on the Thursday before last year’s second weekend. As of 1:45 p.m. PST on Thursday, the cheapest pass available was listed at $625.

The rate at which weekend two passes are being purchased off the secondary market is also increasing. There were about 700 tickets available for resale this time last week, and even yesterday afternoon, there were about 600 on the market. In the last 24 hours, however, there’s been a ton of buying activity, with the number of passes available dipping under 400.