The 41st annual American Music Awards are this Sunday, coming to you live from L.A.’s Nokia Theatre and airing on ABC. This year’s festivities will be hosted by Pitbull, with appearances by Lady Gaga, Kendrick Lamar, and of course Ms. Miley. Leading the list of noms is Macklemore & Ryan Lewis, Taylor Swift and Justin Timberlake. The winners will be determined by a poll of music buyers and the public, and the nominations are based on sales, airplay, social media and video views.

For a hefty price, music lovers and celeb worshipers are able to attend the event. The average resale price for a ticket to Sunday’s sold-out American Music Awards is $367, making it the most expensive American Music Awards since at least 2009 when SeatGeek began tracking the secondary ticket market. Ticket prices are up nearly 50 percent from last year’s awards, which drew an average resale price of $247 per ticket. 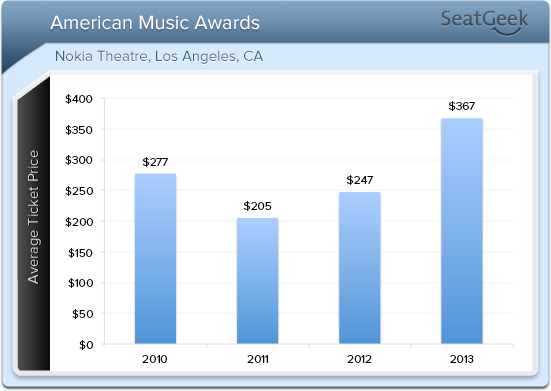 Tickets to the American Music Awards 2013