Will You Be At Camp Bisco XI?

Known as the Northeast’s largest electronic-rock festival; Camp Bisco, is back for its eleventh year. This will be a 3-day event, from July 12th-14th. The event includes 5 stages total, with not only an “up and coming” stage, but two dance tents for silent disco and international dance acts.

With an attendance of only 800 in 1999, last years 2011 festival accommodated 25,000 lively campers. As for this year, we expect an even larger crowd to storm the Indian Lookout Country Club grounds in Mariaville, NY.

Times and stages are TBA

Like The Lineup? Go Check Out The Tickets at Seatgeek

For those of you not familiar with Camp Bisco, it’s an annual music festival focused on live and electronic dance music hosted by the electronic jamband, The Disco Biscuits. This year’s lineup includes a healthy mix of bands and DJs, as well as a rapper or two including headliner Wiz Khalifa. Headlining bands include; The Disco Biscuits, Cut Copy, The New Deal, Lotus, Death From Above 1979, Ghostland Observatory, Conspirator, Break Science with RJD2, Lettuce, Yeasayer, RATATAT, and even the first ever U.S. appearance of Shpongle Live band, a live psychedelic downtempo and ambient band, which includes eclectic instruments such as the flute and cello, as well as live opera singers and dancers. The headlining DJs include; Bassnectar, Pretty Lights, MSTRKRFT, Wolfgang Gartner, Rusko, Skrillex, Orchard Lounge, Holy Ghost!, and Special Disco Version, which is a special DJ set by James Murphy and Pat Mahoney of LCD Soundsystem. For a complete Camp Bisco lineup click here or scroll down. For the official Camp Bisco X set times, and full Camp Bisco Schedule 2011, scroll down.

This year’s festival features 5 stages including two side-by-side main stages for quicker changeovers in between sets, which equals more music. In addition, this year will be the first year that the festival features two late night dance tents for more late night options. Camp Bisco 9 in 2010 saw the addition of a silent disco. For those of you who don’t know what a silent disco is, it is a disco (concert) where the music is listened to via headphones, and not a traditional PA system or speakers. This year, Camp Bisco X will feature a much larger two channel silent disco. Two channels means there will be two DJ’s performing on stage simultaneously and the listeners will be able to switch between them and decide who they want to dance to. Other new amenities include a new main gate for faster entrance into the festival, daily music workshops and seminars, and a larger capacity late night tent. 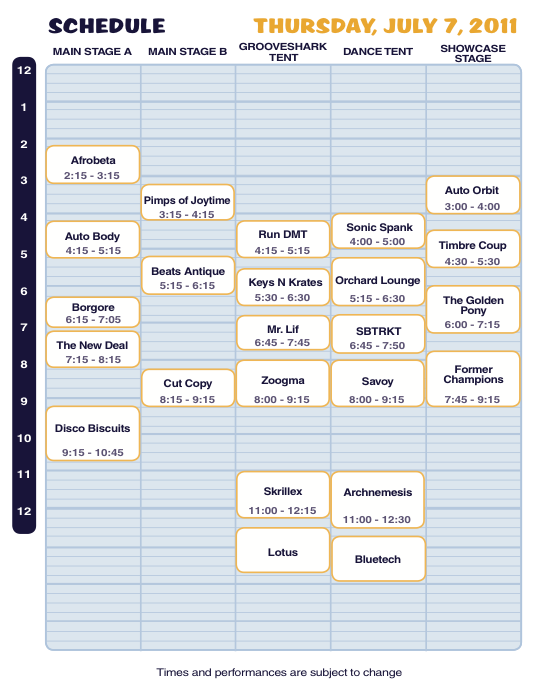 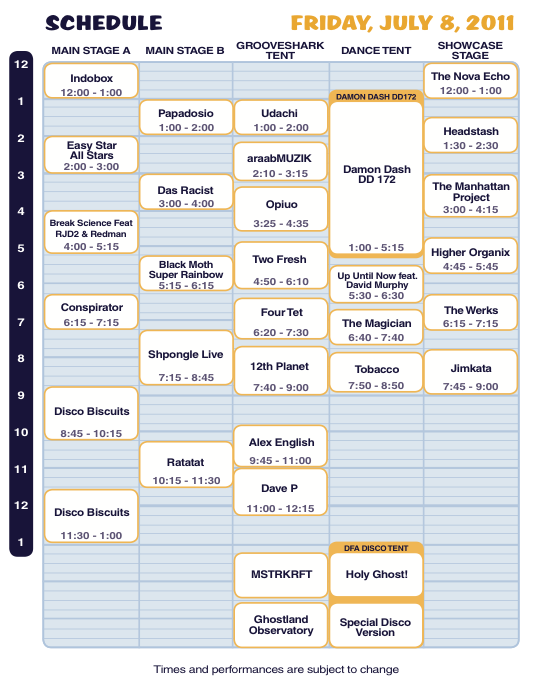 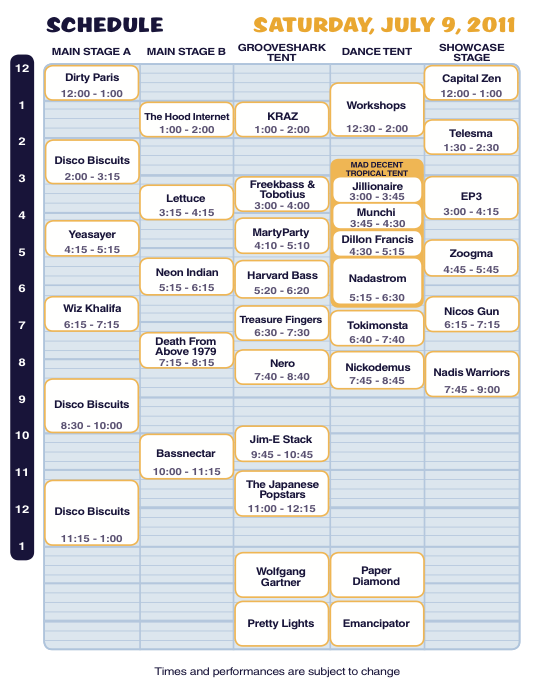 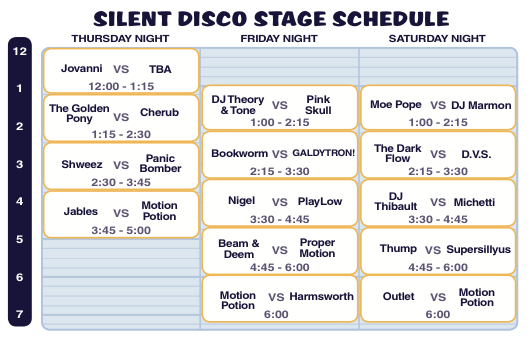 Last week, Camp Bisco X announced both good news as well as bad news. First the good news: Borgore has been added as a last minute addition to the Camp Bisco X lineup. Additionally, rapper Redman has been added to the bill and is scheduled to play along side of Break Science and RJD2. Break Science has a history of collaborating with rappers at Camp, as last year they played with Talib Kweli as well as David Murphy from Sts9. Unfortunately, Rusko had to cancel his gig at Camp Bisco X due to last minute changes in his European touring schedule. Fellow UK dubstep producer, Borgore, will be filling in for Rusko.

Camp Bisco has just announced the official day-by-day schedule, as well as what acts are playing the late night dance tents, and the Disco Biscuit set breaks.

Additionally, Camp Bisco has teamed up with BangOn! NYC, and will be throwing two nights of specially themed parties. The first will take place Friday night and has been dubbed “Disco-pocalypse.” This party will replicate a 70’s-style dance party featuring disco music, so come ready to get your boogie on. The next night’s bash will be a “Newer Wave” 80’s-themed party, so be sure to wear neon. These two features of Camp Bisco X will give festival-goers a new and unique festival experience, which is just one reason why Camp Bisco X is one of the top festivals of summer 2011.

Camp Bisco has recently announced the lineups for these specialty stages. The Showcase Stage, which will include up-and-coming artists from both the northeast, and the United States as a whole will take place on what was The Hill Stage in previous years. The lineup for the Showcase Stage includes: Nadis Warriors, Former Champs, Ep3, The Werks, Zoogma, The Manhattan Project, Timbre Coup, Jimkata, Capital Zen, Headstash, Auto Orbit, Higher Organix, Nicos Gun, Dirty Paris, The Nova Echo, The Golden Pony, The Werks, and Telesma.

The Philadelphia Experiment, or PEX, will have a small village at camp. PEX is a national organization consisting of artists, musicians, performers, pyrotechnics experts, and lighting experts that was started at Burning Man in 1999. This year, the PEX Village returns to Camp Bisco with a performance area surrounded by art installations, and fire sculptures including a fire cannon that shoots flames 30 feet into the air. The lineup for the PEX village includes: DJ Everyday, Justin Paul, Lee Mayjahs?, Peter Parker, VJ Kevlar, Members of Leana Song, Members of Mutaytor, and Liana Luv.

Finally, DD172, which is Damon Dash’s media collective, will be showcasing their music, videos, publications, clothing, and art at Camp Bisco X. DD172 is a company that supports and participates in the creation, distribution, and monetization of works by artists, musicians, athletes, writers, and filmmakers. This year, Damon Dash’s DD172 will be bringing Mckenzie Eddy, Da$h, Skibeatz, Sean O’Connell, Terri Walker, Tabi Bonney, GLC, Cassidy, and Locksmith with them to Camp Bisco.

Check out SeatGeek for all your concert ticket needs!

Click here to read SeatGeek’s blog about the road to Camp Bisco X!

Big shout out to Sebastien Barre for many of the photos in this post.

Last weekend, the 10th installment of the Disco Biscuit’s music festival, Camp Bisco, took place in Mariaville, NY. This year’s event was significantly larger than all previous year’s, with attendance up nearly 75% from last year’s event, which took place last July. Check out the graph below to see how Camp Bisco has grown over the years, since its first appearance in 1999. 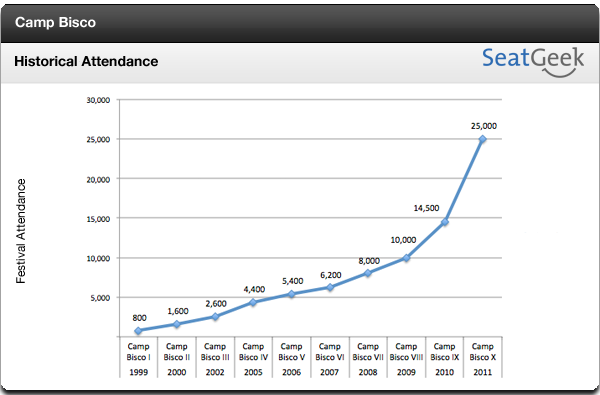 Although this was the largest Camp Bisco to date, fun and good times were still had by all. There were countless highlights and standout acts throughout the whole weekend. No matter if you were there for the Disco Biscuits, the dubstep, or even just the party and atmosphere, Camp Bisco was truly an amazing experience.

If you weren’t able to attend Camp Bisco X, or if you simply want to relive some memories, check out SeatGeek’s Camp Bisco 2011 Recap, complete with Camp Bisco setlists, pictures, and videos from the weekend. Be sure to come back soon, because SeatGeek will continue to update this blog with more setlists, photos and videos as they are released and uploaded. See you all at Camp Bisco XI in 2012!

Set 3: On Time, Strobelights And Martinis > Little Shimmy in a Conga Line1 > Digital Buddha1 > Gangster > Tricycle > Save The Robots

Divine Moments Of Truth, Periscopes of Consciousness > Schmaltz Herring, Shpongolese Spoken Here, I Am You, Invisible Man In A Fluorescent Suit, No Turn Un-Stoned, When Shall I Be Free? > The Stamen of The Shaman, Dorset Perception, My Head Feels Like A Frisbee, Around The World In A Tea Daze

Basis For A Day Jam > Catalyst:

Little Shimmy In A Conga Line:

Stay Tuned for more Camp Bisco setlists, pictures, and videos as they are released and uploaded!

A cool photo of rain falling through lasers at Camp Bisco 9. *

Another laser photo from Camp Bisco 9 *

Stay Tuned for the Camp Bisco 2011 Schedule, as well as more updates and information!

Questions or comments? Feel free to tell us your thoughts and opinions below. Are you happy with the camp bisco lineup? What songs do you want to hear at Camp Bisco 10? Who are you looking forward to most at Camp Bisco? How many Camp Bisco’s have you been to? Share with us below!