Check Out The Concerts at Cowboys Stadium This Summer

Cowboys Stadium, the home of the Dallas Cowboys that opened in 2009 with a price tag of $1.15 billion, has played to a wide variety of events other than NFL football. From the NBA All Star Game in 2010, to major collegiate football bowl games and to boxing featuring Manny Pacquiao, the list goes on and on. The stadium is scheduled to host the NCAA Final Four in 2014.

As for concerts held at Cowboys Stadium, the venue has had concerts by George Strait (2009), The Jonas Brothers (2009), Paul McCartney (2009) and U2 (2009). With the wide range of events happening at Jerry Jones’ new palace, I wonder why there hasn’t been more.

As for 2013, the summer has two big concert tours coming to Dallas that will use Cowboys Stadium as the host for their stop for fans in both Dallas and Forth Worth as well as the surrounding areas.

On May 11, Kenny Chesney comes to town with Eric Church and Kacey Musgraves as part of his No Shoes Nation tour and on May 25, Taylor Swift rolls into Dallas with Ed Sheeran on her Red tour.

Tickets for all concerts as well as all other events at Cowboys Stadium this summer can be found right here at SeatGeek.

For a look at the seating chart for concerts at Cowboys Stadium, check out the image below. The venue seats 68,756 patrons. 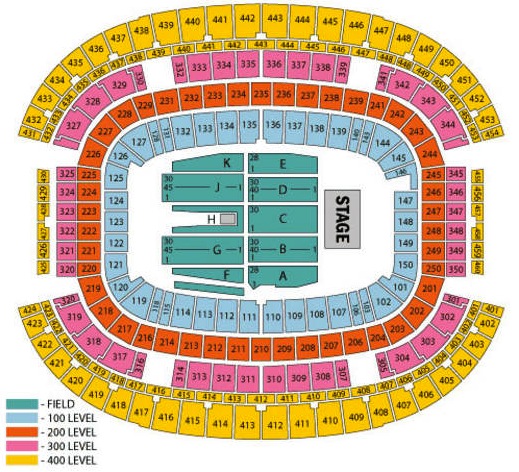