DTE Energy Music Theatre, located in the metropolitan area of Detroit in Clarkston, MI, has consistently ranked among the top-selling outdoor concert venues in the nation since it opened back in 1972.

Over the 40 years it has been open, one can imagine the names that have played the venue. In recent years however, a sampling of bands and artists that have played summer concerts at DTE Energy Music Theatre include the following list: Dave Matthews Band; Kid Rock; Allman Brothers Band; Jimmy Buffett; Eric Church; Luke Bryan; Jason Mraz; Kelly Clarkson and The Band Perry.

This summer, the following bands and artists coming through the greater Detroit area that will play the venue include the following: Tim McGraw gets things started on May 19; Toby Keith on June 16; Darius Rucker on June 30; Dave Matthews Band on July 9; Jonas Brothers on July 13; Keith Urban on August 4; Detroit native son Kid Rock will play 7 shows with support from ZZ Top from August 9 through August 19 and Depeche Mode will take the stage on August 22.

Tickets for all concerts at the DTE Energy Music Theatre this summer can be found right here at SeatGeek.

For a look at the seating chart for concerts at DTE Energy Music Theatre, check out the image below. The venue seats 15,274. 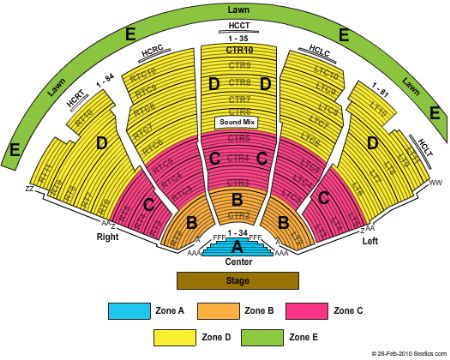