Everything You Need to Know About Poptopia

Though the name Poptopia may be new to some, fans of pop music living in the bay area are no stranger to the annual extravaganza. Hosted by 99.7 NOW!, the holiday concert–which used to go by the name Triple Ho Show–is back for another year with another powerful lineup. Headliners for the bash include Taylor Swift, Ed Sheeran, The Chainsmokers and Niall Horan, plus 2017 breakout stars Dua Lipa, Logic and Khalid.

The concert will be held at the SAP Center in San Jose, CA on December 2. Check below for more info on how to score tickets to the sold-out affair, peep the venue seating chart, and get answers to your frequently asked questions.

99.7 NOW!’s Poptopia Fest will take place on Saturday, December 2. Doors Open at 6PM and the show ends by 11PM.

How to Get Poptopia Tickets

Due to the heavy-hitting lineup, Poptopia is unsurprisingly sold out. Lucky for you, tickets are never actually sold out on SeatGeek. The current get-in price of the show (as of 10/19) is $166 for one e-ticket. For a duo looking for a pair of tickets, the lowest you can pay is $173.

The 2017 Poptopia festival will be held at the SAP Center in San Jose, CA. The SAP Center is located at 525 W Santa Clara St. and holds 17,496 attendees. Check out our seating chart below. 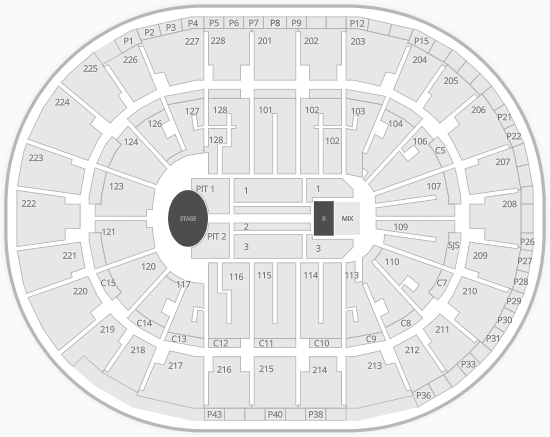 Wondering what is allowed into Poptopia, what the seating will be like and if there are any age requirements? Head to 99.7 NOW!’s official website for all these answers and more. Official Poptopia FAQ here.

Everything You Need to Know About Lover Fest West

Everything You Need to Know About Lover Fest East

Everything You Need to Know About Taylor Swift’s ‘Reputation’ Tour

5 Signs Your Favorite Artist is About to Announce a Tour

The 25 Highest Grossing Tours of the Summer

Taylor Swift More Popular Than Ever in Nashville

‘Welcome to New York’ (and More): Taylor’s on Tour