Foster the People to Pump Up Bowery Electric with Private Show

Earlier today, it was announced that Foster the People will play at Bowery Electric in a private show for SiriusXM Listeners, in a move somewhat remiscent of when Radiohead played at Roseland Ballroom. Exactly what warrant’s this private show is unclear, but hey congrats to all SiriusXM people out there in New York.

“SiriusXM’s Alt Nation played our music before any other radio outlet in the country—this show is a way for us to thank the SiriusXM team and do something special for our fans,” said Mark Foster of Foster the People. Source: sacbee.com Call it what you want (see what I am doing here…) but it sounds to me that Foster the People is getting a nice little paycheck from the people over at SiriusXM so they won’t have to live life on the nickel. 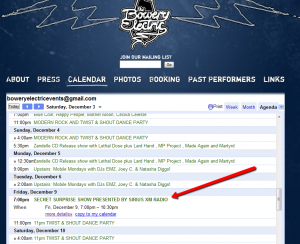 This isn’t an uncommon practice for SiriusXM, on November 9th at 12:00PM, there will be a “Coldplay Townhall” where Coldplay superfans will be able to ask the band questions live on the radio. It is super unclear how to actually get tickets at this point. In fact the Bowery Electric site still lists this as a “SECRET SURPRISE SHOW PRESENTED BY SIRIUS XM RADIO” and also has the time listed as 7:30PM – 10:30 PM. We will keep you posted as more information develops.