Hersheypark Stadium, located on the grounds of Hersheypark in the center of that chocolate paradise in Hershey, PA, has served as the summer home of the Philadelphia Eagles as well as the site of rodeos, athletic and music competitions, concerts, pageants, and racing events. (source: Hersheypark Stadium site)

As for concerts, bands and artists that have frequented the space over the years include the following: Dave Matthews Band, Alabama, U2, James Taylor, and The Who.

This spring and summer, the venue will open its doors to fans of the following bands and artists who will make Hershey a stop along their tour routes: One Direction on July 5 and July 6; Dave Matthews Band on July 13; Big Time Rush and Victoria Justice on July 19; Justin Timberlake and Jay-Z with their Legends of Summer joint tour on August 4 and Jason Aldean with support from Jake Owen on August 10.

Tickets for all concerts as well as all other events at Hersheypark Stadium this spring and summer can be found right here at SeatGeek.

For a look at the seating chart for concerts at Hersheypark Stadium, check out the image below. The venue seats up to 30,000 patrons for concerts. 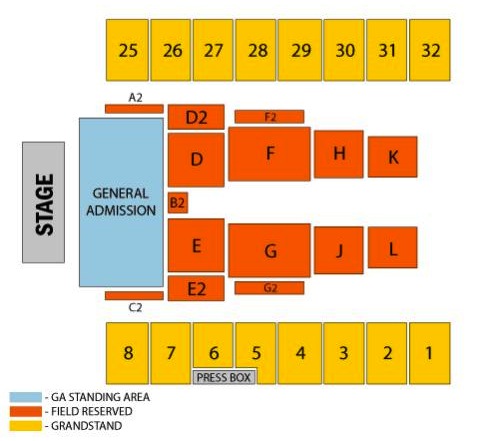