Intrust Bank Arena, a multi-purpose arena located in Wichita, KS, is the second largest indoor arena in the state of Kansas behind only Allen Fieldhouse, the home of the Kansas Jayhawks.

The venue has been a consistent stop on big concert tours coming to the Wichita area. Bands and artists that have played the venue since opening in 2010 include: Brad Paisley; Elton John; George Strait; the Eagles; Dave Matthews Band; Kid Rock; Keith Urban and Barry Manilow.

This spring and summer, the following bands and artists coming to Wichita that will play Inbank Trust Arena include: Zac Brown Band on April 20; Jason Aldean on May 9; Taylor Swift on August 6; Rascal Flatts on August 9 and Luke Bryan on September 12.

Tickets for all concerts as well as all other events at Intrust Bank Arena this spring and summer can be found right here at SeatGeek.

For a look at the seating chart for concerts at Intrust Bank Arena, check out the image below. The venue seats 15,750 patrons for concerts. 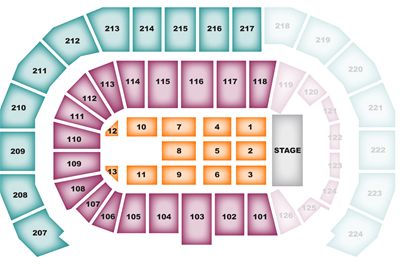