We loved him when he was practically prepubescent; we watched him and his career grow, and now he makes us feel a bit old, as we marvel about how grown-up and legitimately sexy he’s become: Justin Drew Bieber, the Canadian heartthrob, will be gracing San Antonio’s AT&T Center with his croonings on January 12th. Fans (and their concerned parents, or perhaps semi-reluctant older siblings) can expect old favorites like – “Baby,” “Never Let You Go” – as well as hot new hits, such as “Boyfriend” and “As Long As You Love Me”. Bieber’s hair, clothes and height may all have changed, but his music remains as catchy as ever.

In case you didn’t figure it out from their name, Beliebers are devoted fans and tickets to JDB’s shows tend to sell out faster than you can say “Runaway Love.” Check out our list of list of discount deals to see what’s available and which sections have the best deals. After you’ve reserved your seat, what better way to get excited about his concert than to check out our other Bieber info? Read up on the AT&T Center’s riveting history and take a look at the venue’s seating chart. Or study up on the star’s past setlist to make sure you have all the lyrics memorized before you see him in concert. Everyone knows it’s not a proper concert unless the fans are screaming every word.

Can’t make the San Antonio performance? Click here for our full list of Justin Bieber tickets (he’s on tour for the next six months!).

Only 10 years old, The AT&T Center is San Antonio’s biggest sporting and concert arena. When arranged for concerts, this indoor venue sits up to 19,000 attendees and features 2,018 club seats, as well as 50 luxury suites. In addition to housing Bieber for the night, it is a more permanent home to the the NBA team, San Antonio Spurs and the AHL team, the San Antonio Rampage. Originally it was named the SBC Center, as SBC Communications bought the naming rights. However, after SBC acquired AT&T, they changed their name, and so, in 2006, the arena was officially re-named. Names change – great fun in this venue remains the same. 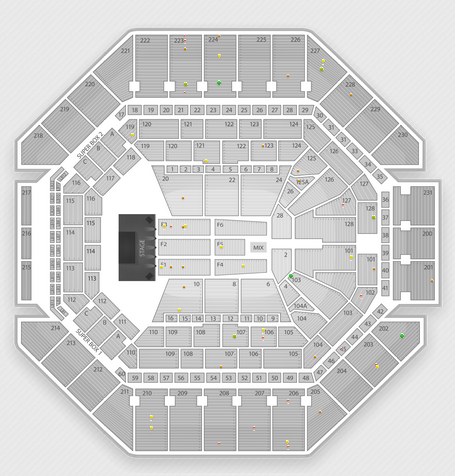 Justin Bieber: “Somebody to Love”