Check out 2012 Lady Gaga tickets here at SeatGeek.
It’s a digital pop showdown as Justin Bieber and Lady Gaga race to be the first to get to 1,000,000,000 (1 Billion) YouTube views. Bieber and Gaga already claim the first and second most watched YouTube videos of all time:

According to TubeMogul, Bieber has been earning 3.98 million hits a day overall and Gaga a relatively puny 2.04 million. Still, Bieber got a later start on his recording (and YouTube) career. Bad Romance, for instance, was posted to YouTube in November 2009, three months before Baby went up in February 2010. Short of a miracle or a phenomenal feat of hacking by the young Bieber, Lady Gaga is on pace to hit the billion mark first on October 20th, about 11 days ahead of her rival.

The race is a spectacle (actually, 6 million spectacles daily), but what does it say about demand to see Bieber and Gaga? From secondary market ticket prices, it seems that the volume of people watching these artists online may not be a very good indicator of the demand to see them in concert.

The billion-view trophy aside, current demand for Bieber’s music videos on YouTube is nearly double the demand for Gaga’s; however, prices for his shows fall short of Gaga’s. If you happen to live in Hawaii, you can catch Bieber for less than $25 tonight or tomorrow. In Ontario, his home territory, Bieber is faring better. Tickets are on sale for his October 24th show for around $100, though they are forecasted to go down. Gaga’s home town (NYC) tickets in late February are already going for $105 and SeatGeek’s crystal ball says they’ll be worth much more by Valentine’s Day. Check out this price comparison for Bieber and Gaga tickets sold since August. 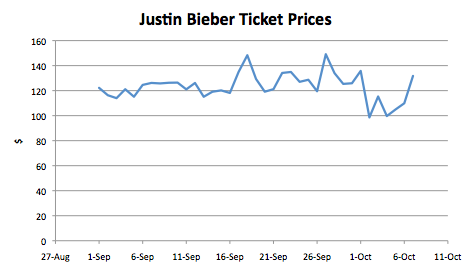 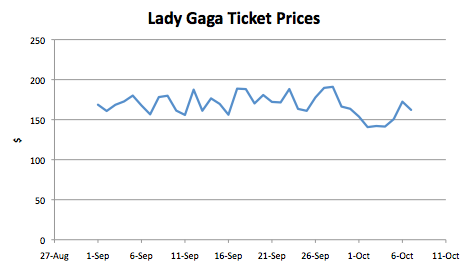 Demand to see Gaga live is definitively greater, despite Bieber’s YouTube advantage. Gaga averages $172 a pop, $48 higher than Bieber’s $124. You might say that more people want to see Bieber live but he has a younger audience that often can’t afford to buy tickets or stay out past 8 o’clock, or that they get their fill of him on YouTube, but consider Arcade Fire, whose number one song on YouTube, Rebellion (Lies), has 4,545,873 views. During the same period their tickets sold for $116, almost as high as Bieber’s. Going by YouTube views, their tickets should be selling for 1/100th of the pop powerhouses’ prices.

If Lady Gaga, Justin Bieber, and Arcade Fire are a fair sample of the translation between YouTube to concert popularity, watching an artist on YTouube and going to their concert draw different, or at least differently sized, crowds.