Kanye Likes Fish Sticks, But Fans Don’t Like Him, 16% Less Demanded Than Peers

Ok so it’s not that fans don’t like Kanye, it’s just that when looking at some of our data, I found some interesting trends that I wanted to share with you all. Also, don’t let the headline fool you, I like Kanye. I am listening to Watch the Throne right now (Ni**as in Paris is my favorite). I even liked his polarizing album 808 and Heartbreaks album, aka the auto-tuned one.

But for as much as I like Kanye, he can be a bit of a jackass, as our President once described him, and I like Eminem even more. Wait, where does Eminem come into play you ask? Well, last year Jay-Z hooked up with Eminem for the Home & Home Tour at Yankee Stadium and Comerica Park. As you probably do know, as a ticket search engine SeatGeek has tons of data on…

Yes Kanye, that is why we include them in our ticket search results. As I was saying, we have tons of data on event ticket prices. I personally thought it would be interesting to compare ticket demand for Watch the Throne tickets (Jay-Z with Kanye West) to the The Home & Home Tour (Jay-z with Eminem), I hope other people find this interesting as well. Let’s take a look at the data. 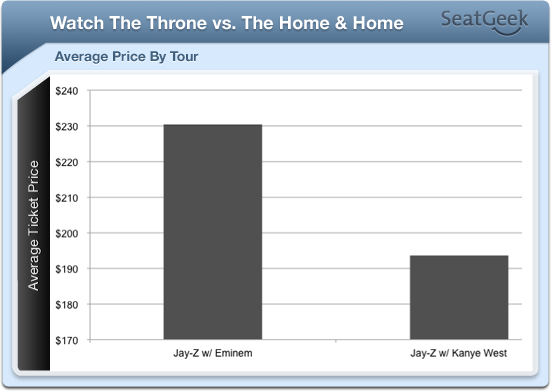 Ok so this isn’t the soundest of conclusions. There are many variables at play, and doing a show in Yankee Stadium is likely always going to yield a premium in ticket prices, but the data is still interesting.

What are your thoughts? Did you get a chance to go to The Home & Home Tour like I did? Going to The Throne Tour? Do people like seeing Eminem live better than Kanye West? Do you like fish sticks? Please share in the comments below or hit us up on Twitter @SeatGeek. Check out the Eminem Lil Wayne 2012 tour.