M&T Bank Stadium, the home of the Super Bowl Champion Baltimore Ravens, opened in 1998 and is located adjacent to the home of the Baltimore Orioles, Oriole Park at Camden Yards, in the Inner Harbor section of the city of Baltimore.

This summer, one of the hottest tickets on the concert circuit is coming to Baltimore and M&T Bank Stadium will be the host venue. On August 8, Justin Timberlake and Jay-Z will take the stage as part of their Legends of Summer tour – sure to be a highlight of the concert scene in the Baltimore/DC region this summer.

Tickets for all concerts as well as all other events at M&T Bank Stadium this summer can be found right here at SeatGeek.

For a look at the seating chart for concerts at M&T Bank Stadium, check out the image below. The venue seats 71,008 patrons. 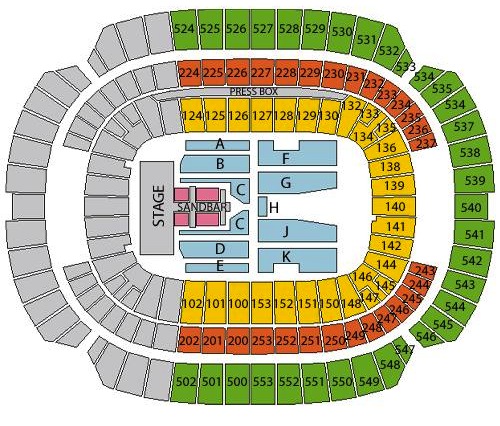