Oh, how the mighty have fallen. Just two years ago, the New York Giants were hoisting the Lombardi Trophy, having beaten the Patriots yet again in the Superbowl.  Now, at 0-6, the Giants are becoming best friends with the winless Tampa Bay Buccaneers and Jacksonville Jaguars, and no one wants to be friends with those guys. Buccaneers and Jaguars fans don’t even want to be friends with those guys. And yet that’s the position the Giants find themselves in: They’re on a sinking ship trying to win a few battles, this year’s war already lost.

If John Mara and Steve Tisch, the two owners of the New York Giants, aren’t careful, they could be dealing with more than just a lost season. According to Forbes in 2003, the Giants were ranked the 22nd richest team in the NFL, worth an estimated $523 million. In 2013, after two Superbowl titles, Forbes ranked the Giants as the fourth-most valuable team in the NFL, worth an estimated $1.47 billion. In other words, they nearly tripled their value in ten years. That’s, uh, impressive. But the Giants’ fall could be equally quick if they maintain their current losing ways. Just look at their 2013 ticket prices. 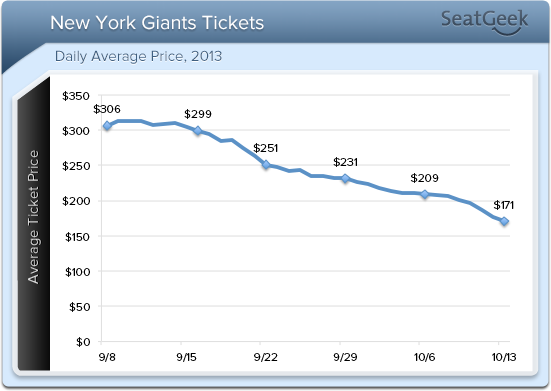 As the chart shows, the average price for Giants tickets was $306 in Week 1 – which, by the way, was the most expensive average ticket price for Week 1 – and that number fell to $171 for Week 6. That’s also impressive, but in a bad way. And it gets worse. For this upcoming matchup with the Minnesota Vikings on Monday Night Football, the average resale price is $188, the lowest average ticket price for a home game in more than two years. Giants fans are actually selling their tickets for less than face value for the first time in more than two seasons. Fans still hoping to sell their 300-level seats can expect to settle for a $20 markdown per ticket on the secondary market.

Want more bad news? Tickets for Monday’s game against the Vikings are selling for just $79, down from $207 per ticket before the season and $177 per ticket just one week ago. Yikes. It can’t get any worse, right? Fear not; I think I’ve found rock bottom. Right now on SeatGeek, Giants-Vikings tickets are available for as little as $50 each. Meanwhile, tickets for the Jets’ game against the Patriots a day earlier at MetLife Stadium start at $80. In fact, the 3-3 Jets are currently the 16th-most expensive ticket in the NFL at $136, just five spots behind the 0-6 Giants. If the Giants go winless for another week or two and the Jets stun the Pats, it’s possible that the Giants’ little brothers could overtake them as the hottest ticket in New York. There, that scenario has to be rock bottom…right?

Falling ticket prices this season hint at a larger potential concern for owners John Mara and Steve Tisch : If the Giants can’t rebound – and quickly – their status as the NFL team in New York could be in doubt, never mind their place in the top five most valuable NFL teams.