Jones Beach, located out on the heart of Long Island in the suburbs of New York City, is home to the Nikon at Jones Beach Theater, one of two major outdoor arenas in the New York metropolitan area, along with PNC Bank Arts Center.

The venue is a great destination to see live outdoor music, sitting right on the water and offering great views of the bodies of water surrounding Jones Beach State Park. Major contemporary bands and artists pack the concert schedule each summer at the Nikon at Jones Beach Theater and this year is no different as the venue recovers from damage caused by Hurricane Sandy last year.

Bands and artists visiting the NYC metropolitan area who will play the venue this summer include the following: Pitbull and Kesha on June 1; Fleetwood Mac on June 22; Rush on June 23; Dave Matthews Band on June 25 and June 26; One Direction on June 28 and June 29; Phish on July 12; Lil Wayne on July 19; Blake Shelton on July 21; Maroon 5 on August 11 and John Mayer on August 28.

Tickets for all concerts at the Nikon at Jones Beach Theater this summer can be found right here at SeatGeek.

For a look at the seating chart for concerts at Nikon at Jones Beach Theater, check out the image below. The venue seats 15,000. 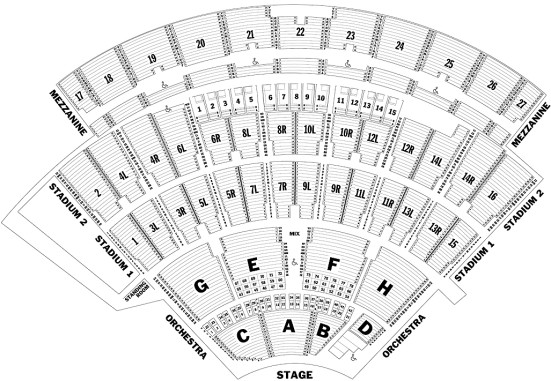