One Direction Headlining US Tour!

Ok, these guys are pretty darn cute. How can you not love this kind of wholesome horsing around, in the vein of ’60s cuties The Monkees (replete with green screen effects and groovy, bubble-lettered titling?). We’re into your new single, “Kiss You,” 1D – enjoy the video below!

Unable to catch One Direction live on tour? Tired of watching grainy iPhone videos of screaming fans obscuring and drowning out 1D on YouTube? Never fear – the former X Factor contestants are hopping on the latest pop trend, and will soon star in their very own 3D concert film! Not only that, but famed director Morgan Spurlock (Supersize Me) has signed on to helm the high-profile project. The film’s release date is set for August 30, 2013, meaning you only have to wait one year before taking the boys (digitally) home with you.

Irish imports and British Boy Band One Direction have announced they will be headlining New York City’s Madison Square Garden on Dec. 3. The show will follow the groups’s 2012 U.S. summer tour and tickets will go on sale April 6.

In late March One Direction announced their first headlining tour in the US, just days after finishing a wildly successful stint in the US. If you haven’t yet heard of One Direction, brace yourselves because they are about to take over the pop airwaves in a way that no “boy band” has been able to do since the glory days of *NSYNC and the Back Street Boys. I am not ready to say Bye, Bye, Bye to Justin Bieber as the most beloved teen sensation, but let this be a warning that he has a formidable force now competing for the hearts and minds of teenage girls everywhere.

One Direction is a boy band out of the United Kindom and they are ushering in a new era of “british invasion”. Consisting of members Niall Horan, Zayn Malik, Liam Payne, Harry Styles and Louis Tomlinson, One Direction has had stunning success since their breakthrough single “What Makes Your Beautiful” hit the airwaves, and fans weren’t let down with the full album, ‘Up All Night’.

Get ready folks, there is a new boy band in town and this British Invasion might also be hysteria inducing ala The Beatles.

Resale Tickets for One Direction

American fans have been going crazy for One Direction tickets so far in 2012. Indeed, their entire 2012 tour sold out so quickly that the group decided to make a return US tour in 2013. Let’s take a closer look at how expensive their resale tickets have been. What’s most remarkable about One Direction’s resale prices is how expensive their top shows have been. Their May 26th concert in the Beacon Theater in New York City had an average ticket price of over $526, making it one of the most expensive concerts of the last several years. One Direction’s two other New York City performances also had average resale prices of over $300. 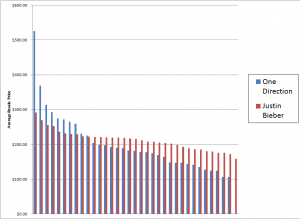 Despite the shocking prices for these performances, fans at some of One Direction’s other tour stops have found tickets much more affordable. Their February 28th concert in Albany, NY, for example, had an average resale price of only $106. This wide spread in ticket prices, with higher highs and lower lows, is the key difference between resale prices for One Direction and those for Justin Bieber this year. As this chart shows, One Direction’s most expensive concerts have cost significantly more than Bieber’s, but Bieber’s prices are more consistently high on the low end. Overall, the average resale ticket for One Direction in 2012 has cost $201.74, while the average Bieber resale ticket has gone for $212.84.

Below are the tour dates of the just announced (on 3/21/2012) One Direction headlining tour in the United States.

One Direction Tickets – Enter the Contest

The first two actions will get you 1 entry, but you can also +1 this post and comment on our Google+ Page to tell us why you should win for 6 additional entries! Click here >.

Below are the average prices people spent on One Direction tickets for past/future events. Originally signed by Simon Cowell via the UK show X-Factor (similar to American Idol), One Direction has since gone on to sign with Columbia Records in the US, and as you can tell from the ticket prices below, they have been a near instant success.

Here is a closer look at how ticket prices have moved over time for the night Beacon Theatre show.

One Direction Setlist from Toronto

One Direction One Thing – Live on SNL

One Direction Live on SNL

Will you be getting concert tickets for One Direction? If so, where will you be seeing him? Let us know in the comments below.