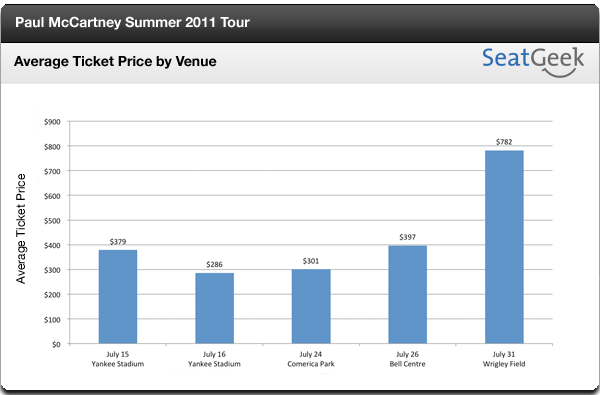 How long does it take Paul McCartney tickets to sell out? Not days. Not hours. Not minutes. Try under 10 seconds.

When the Hard Rock Hotel & Casino put 4,000 seats on sale on February 14, 2009 to celebrate the opening of its new $60 million music venue, tickets sold at a rate of 600 seats a second — selling out in 7 seconds! It was the same case in 2010: McCartney’s December 17th show at London’s 100 Club also sold out in a matter of seconds. After the announcement of Paul McCartney’s On the Run tour, tickets for the July 15, 2011 show at Yankee Stadium were again sold out just moments after they were released.

After Paul McCartney’s On the Run tickets flooded the secondary market, we took a look at average prices for five of Paul’s stops this summer.

After the July 15th Yankee Stadium show sold out in record time, we weren’t surprised to find tickets listed on the secondary market at a whopping average price of $379. The significantly lower average price for July 16th at Yankee Stadium ($286) illustrates the economics of ticket sales, suggesting that the pressure of demand was somewhat released with the announcement of the second NYC show. Comerica Park and Bell Centre ticket prices for Paul McCartney are also very high considering the “get in” price on the primary market is considerably lower — but what is going on with Wrigley Field?! At an average price of $782, the Wrigley Field show is DOUBLE the average price of both the Yankee Stadium and Comerica Park shows.

If I were in Chicago, I might even look into a bus ride up to (and hotel room in) Detroit for the show!

Buying Tickets for Paul McCartney On the Run Tour

As many of you may have experienced, it is difficult to get the tickets you want to see Paul McCartney’s On the Run tour. Fans are even standing at the steps of the box office a full day in advance so they can be sure they get the highly coveted tickets. Also, the July 15 Yankee Stadium show sold out on primary markets in seconds. We expect that ticket prices will also be rising since Paul McCartney has been nominated for the Best UK Live Performance. At SeatGeek, we have the best deals for Paul McCartney’s On the Run Tour tickets, even for the sold out shows.  Here are some of the great deals for your city: