Super-High Prices to See Adele in Denver Begin to Drop

Although tickets to see Adele this weekend in Denver are dropping in price, the concerts are still the most expensive events Denver has seen in years.

The average resale price for Adele’s Saturday (July 16) and Sunday (July 17) shows are $579 and $533, respectively. This makes them the most expensive events in Denver since at least 2010–when SeatGeek started tracking the secondary market– topping both the 2014 and 2016 AFC Championship Games, and Taylor Swift last September. 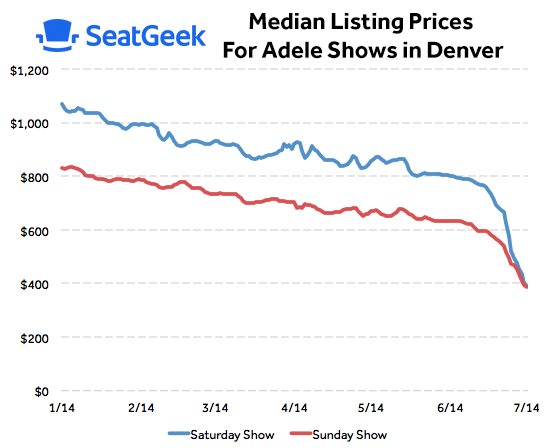 Denver is one of the more expensive stops of the Adele tour, with an overall average resale price of $552. The only cities with a higher average resale price are: Nashville, Atlanta, Dallas, Boston, New York and Washington D.C. Adele has also become much more popular in Denver, if you consider that her 2011 appearance at the Ogden Theater had an average resale price of $116. Time time around, not only are the prices more than three times higher, but the shows are at a venue that’s 10 times larger.

Tickets to Adele in Denver

While this show is one of Denver’s hottest ever, ticket prices have fallen significantly of late. This means that fans who have waited until now to buy tickets can save big bucks compared to those who purchased them months ago. In the last month the median listing price for the Saturday show has dropped 53 percent, for the Sunday show it has dropped 40 percent.

The current get-in price for Saturday is $150 and Sunday is $144. So if you’re on the fence about whether to see Adele at the Pepsi Center this weekend, the time to buy is approaching! Click here to browse SeatGeek’s complete listing of tickets.