With a three-day pass reselling for an average of $1,252, and each of the shows selling for an average of more than $575 each, the Grateful Dead “Fare Thee Well” Chicago shows are the most expensive concerts of the year. The weekend will be far and away the biggest music event in the past five years, with more than an estimated $12 million spent on the secondary market for the shows.

For both the three-day pass, and each individual show, prices have dropped over the past month as the performances approach. A month ago the cheapest three-day pass for sale cost $754, but today that number is down to $490, a decrease of 35 percent. The median listing price for the Sunday show was $782 a month ago, but is down to $527 today, a decrease of 33 percent. 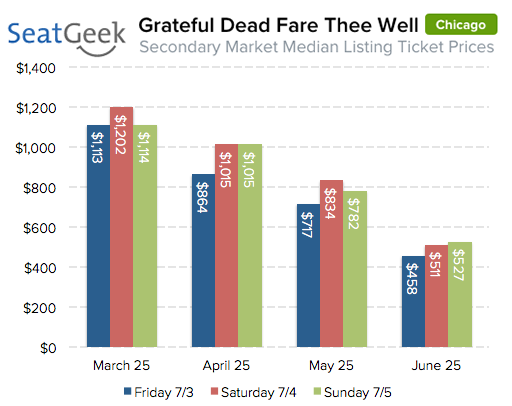 All three of the Chicago Fare Thee Well shows are the most expensive concerts of the year, topping everything from the Academy of County Music Awards concert in Dallas to AC/DC in Edmonton.

Ticket prices for the shows in Chicago are much higher than those for the two shows in California this weekend. The Saturday show at Levi’s Stadium has an average resale price of $168, while the Sunday show has an average resale price of $155. Both of these shows are seeing steep price drops in the days leading up to the performance. A month ago the median list price for Saturday’s show was $295, and today it is down to $144.

With three shows in three nights over a holiday weekend, Grateful Dead fans from around the country are making the trip to Soldier Field. Just 20 percent of the people looking to buy tickets on SeatGeek live in Illinois. New York has the second most prospective buyers, with 12 percent of the web traffic coming from the Empire State. Ohio (7 percent), Arizona (5 percent) and Florida (4 percent) round out the top five.

Where to Watch the Final Grateful Dead Shows