Tonight’s U2 Show Most Expensive of 8-Night Residency

U2 is kicking off the first of an eight-night residency at Madison Square Garden tonight. With more than an estimated $7.4 million already spent on the secondary market for the performances, fans in the New York metro area are taking advantage of the opportunity to see U2 in the flesh.

U2 at MSG Average Ticket Price 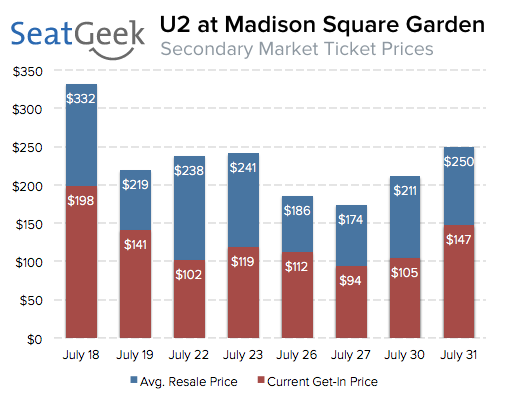 Fans looking to save money should look at tickets for the Sunday (7/26) and Monday (7/27) shows, both of which have an average resale price of below $190 a ticket. Below, a graph details the average and get-in price for each show.

Prices for the shows do range depending on where a fan wants to sit in the arena. Interestingly tickets in the 100 Level ($325 each) are actually selling for an average price of more than those on the Floor ($247). The cheapest seats are those in the West Balcony, which are reselling for $91 each on average. For a unique view of the show fans can sit in the Bridge, where the average ticket is reselling for $123.

In its first tour around the United States since 2011, U2 has seen high ticket prices at many venues this year, but none have come close to topping the average resale price of $332 for Friday’s show in New York. In fact, six of the top 10 U2 shows in the US since 2010 will be from this MSG residency. Two of the shows in Los Angeles, a show in Boston, and a show in Miami in 2011 round out the top 10 most expensive performances by the band.

While Friday’s show will be the most expensive U2 performance in the US in the past five years, it will not be the most expensive concert at Madison Square Garden in the same timespan. In fact, Friday’s show does not even crack the Top 10, which is occupied by bands like One Direction, Bruce Springsteen, Billy Joel and Phish. Friday’s show does top the most recent U2 performance in the New York metro area, when the band played at MetLife Stadium in July 2011. The average cost of a ticket to that concert was $191.

Best Tickets to Get Your Parents for the Holidays

Best Concert Tickets to Get the Music Fan for the Holidays

U2 Tacks On Shows To ‘iNNOCENCE + eXPERIENCE’ World Tour