Times Union Center, originally known as the Knickerbocker Arena when it opened in 1990, is located in Albany, NY, and officially opened with a concert by none other than the late great Frank Sinatra.

In the 23 years it has been open, the Times Union Center has played host to numerous shows from big name musical acts touring the nation. A sampling of those is as follows: Billy Joel a total of nine times (all sell outs); Bruce Springsteen & The E Street Band; U2; Dave Matthews Band; Pearl Jam and the Red Hot Chili Peppers.

This spring and summer, the following bands and artists will be coming to Albany and playing the Times Union Center: Andrea Bocelli on June 13; Fleetwood Mac on June 19 and New Kids On The Block on August 1.

Tickets for all concerts as well as all other events at Times Union Center this spring and summer can be found right here at SeatGeek.

For a look at the seating chart for concerts at Times Union Center, check out the image below. The venue seats 15,357 patrons for concerts. 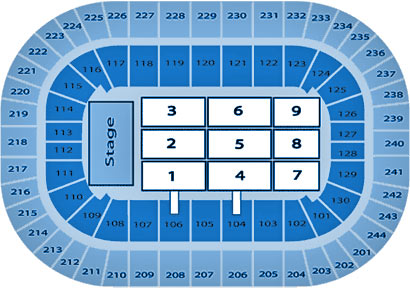