Ahhh, the fourth of July, a time for food, friends and fireworks; the day off work that every American has been anxiously awaiting since Memorial day. It’s a day for us to release our most American instincts and behaviors. Stuffing our faces with barbecued meat, watching others stuff their faces with even more barbecued meat, blowing stuff up in our backyards, then lounging around exhausted from all the face-stuffing and stuff-exploding, are all nationwide traditions on this most celebratory of days. However, these aren’t the only possible forms of entertainment on Independence day. Many Americans enjoy taking a trip to the beach, to the ballpark, or to the local concert venue to catch one of their favorite artists live. There’s nothing more American than sitting on your butt and watching professionals entertain you, whether it be through complex song and dance routines, or superhuman feats of athleticism. With that in mind, we here at SeatGeek decided to take a look at the top selling concerts of this 4th of July.

To absolutely no one’s surprise Lady Gaga takes the top slot yet again, in terms of average ticket prices. As we discovered last month, her “Monster Ball” tour is the most in-demand concert series of the summer, with average ticket prices now over $175. We were curious to know whether prices for her show in Atlantic City on Sunday were influenced by it being on July 4th, so we took a look at the top rated concerts of her tour, and this past Sunday’s concert, while still selling at prices above Gaga’s average, was not even in the top ten Lady Gaga concerts of the tour, ranking 12th out of 34 solo shows between 5/30/10 and 8/31/10.

Clearly, although it probably didn’t hurt sales, ticket prices for Gaga’s show at Boardwalk Hall were not radically affected by its concurrence with a national holiday. Let us now take a look at the other four superstars who topped our 4th of July concert list.

Second to Lady Gaga is Canadian crooner Michael Buble, with average ticket prices of $146.85. That’s right, over 9,500 red blooded American paid close to $150 on average to watch a Canadian perform on our Independence day! Now I not one to tell others how to spend their money, but really patrons of Mohegan Sun? You went to see Michael Buble? I can only hope that he sang this, since it’s as close to American patriotism as will ever emerge from out of his maple syrup encrusted mouth-hole. Connecticut, you better watch your step, or else I’ll be petitioning for your removal from the Union faster than you can say “Eh.”

In any event, tickets for Buble’s July 4th Canadapalooza, were trading at almost exactly the same price as the average for his concerts this summer: Sunday’s average was $146.85, and the overall average is $146.80. This stat alone seems to suggest that the 4th of July had no effect on Buble ticket sales. However, it is interesting to note that Buble performed at the Mohegan Sun arena on July 2nd & 3rd in addition to his show there on the 4th. Tickets for those two shows, a Friday and a Saturday, also popular days ticket sales wise, traded on average for $139.89, and $135.93 respectively, both less than the fourth’s $146.85. 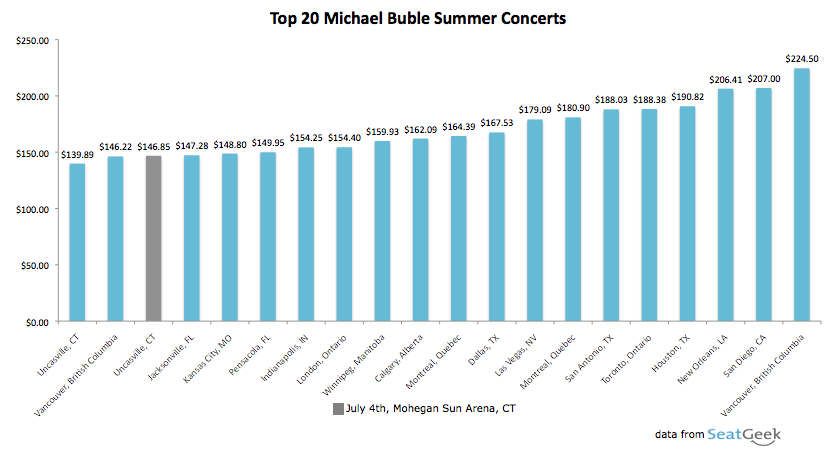 Number 3 on the July 4th rundown is Phish. Always a top draw amongst jam band audiences, Phish is well-known for its legendary holiday concerts, rocking many a New Year’s Eve and Halloween. This 4th of July was no exception. Kicking off their Alpharetta GA concert with a rendition of the Star Spangled Banner, (take note Buble) Phish proceeded to rock the red, white, and blue socks off their audience with highlights including a cover of Rage Against the Machine’s “Killing in the Name.” Unlike Lady Gaga and Michael Buble’s concerts, there is a significant jump in ticket prices for Phish’s Phestival on the Phourth. Tickets for this concert sold for $131.89 on average, significantly higher than their tour average of $84.22, and much higher than their preceding show at the very same venue which traded for $110.00 on average. In fact, Phish’s July 4th concert is their most expensive show this summer besides their 3 shows at the Greek Theatre in Berkeley. Many Phans have a tradition of spending holidays with Phish, and perhaps this ritual can account for the discrepancy in prices. 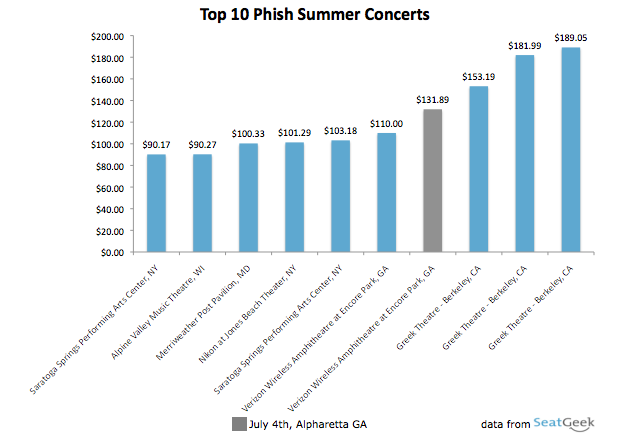 Clocking in at number 4 on our countdown is the indomitable Dave Matthews Band. Dave and his buddies have been a summer tour staple for what seems like forever. However they recently announced that they will be breaking tradition and not touring in the summer of 2011. Additionally it has been made public that their 2010 tour will be concluding on the hallowed ground of Wrigley Field on the north side of Chicago, with Jason Mraz opening. (Tickets for the show go on sale July 17th, be sure to check SeatGeek for the best and cheapest tickets for what is sure to be a sold out event.)

In terms of Dave’s July 4th concert at the Alpine Valley Music Theatre in Wisconsin, prices were lackluster at best. Out of the 41 concerts DMB is playing between May 28th and August 31st, (excluding large festivals such as Bonnaroo) the 4th of July show ranked a measly 26th in terms of ticket prices, trading at $122.34 on average. When compared to Dave’s tour average of $142.85, and the previous day’s average of $137.56 at the same venue, it is clear that the fourth of July did not have a positive influence on ticket sales in this circumstance. 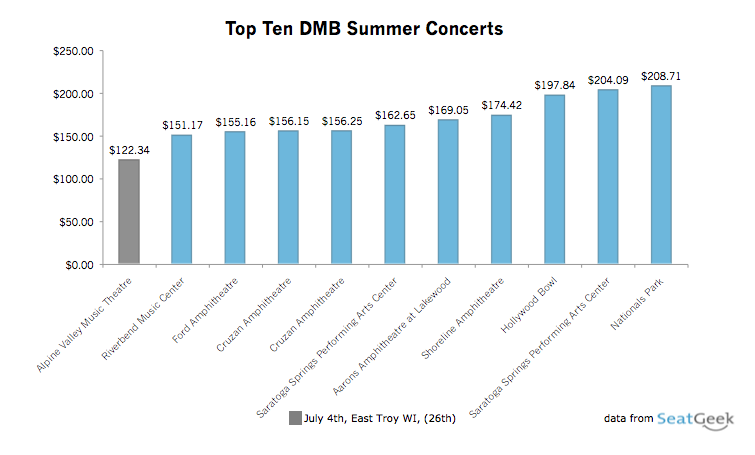 Rounding out the top 5 is Carrie Underwood, who is out touring the world, now through the end of the year.  Her July 4th concert in Milwaukee Wisconsin drew an average ticket price of $84.36, good enough for the top 5 concerts of the day, but well below her tour average of $104.89. In fact, out of the 100 shows she is performing in the U.S. and Canada this year, her July 4th performance ranks close to the bottom third in average ticket price, placing 66th. Carrie’s next appearance will be on the Today Show on July 30th. Her next full show will take place on August 29th at Ravinia Pavilion in Highland Park Illinois. 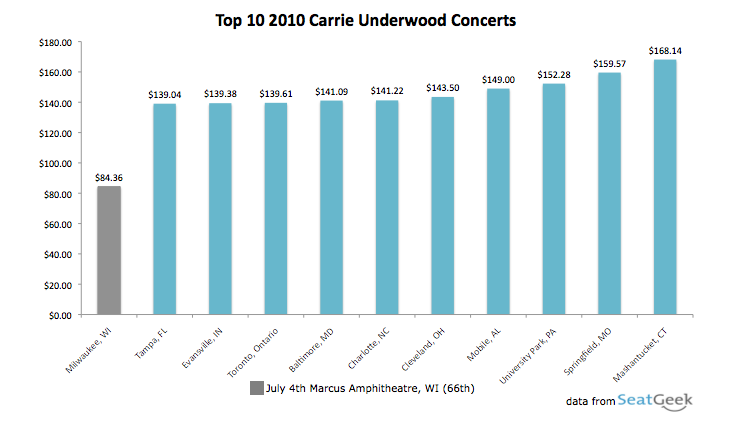 As we further analyze this data we can come to the reasonable conclusion that despite its celebratory and relaxing atmosphere, as well as the three day weekend in the middle of which it resided, this national holiday does not appear to have radically affected concert ticket prices. 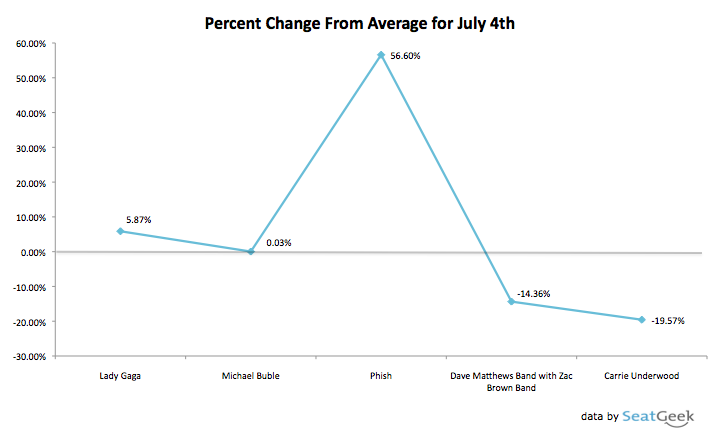 So the next time a national holiday rolls around, (Labor day I’m looking at you) instead of lounging around the yard, or heading down to the JC Penny for their 300th 50% off sale of the year, why not head out to the local amphitheater and celebrate the end of summer by catching a concert? A great time is sure to be had by all, and best of all, prices shouldn’t be that different than normal.

For all your ticket needs, for a holiday, or any other day, be sure to check out SeatGeek and for more updates, news, and analysis be sure to follow us on twitter @SeatGeek, like us on facebook at facebook.com/SeatGeek and feel free to email me at jonathan@seatgeek.com with any questions or comments.