Most Demanded Phish Venues for Summer 2011

Check out SeatGeek for Phish tickets. Want to win FREE tickets to see Phish, or any of your favorite artists? Check out our “Three for Free” Summer Ticket Giveaway!

Phish is, without a doubt, one of the best jam bands of recent history. Following in the Grateful Dead’s footprints as an improvisation rock band, Phish’s music is influenced by a wide variety of genres including rock, jazz, reggae, bluegrass, and even barbershop quartet.

In 2009, Phish began touring again after a 4.5 year hiatus. Since then, they have played multiple tours and even headlined their own festival, Festival 8. In early 2011, Phish announced a 30-stop tour and even more recently, a 3-day festival in Watkins Glen, NY called, Super Ball IX.

In late May, Phish opened up their tour with a 3-night sold out run at the historic Bethel Woods Center for the Arts (pictured below), which is at the original site of Woodstock ’69. Phish is now 4 weeks into their summer tour and they have already sold out 40% (12 of 30) of their shows. Other notable venues that Phish is playing this summer include; Merriweather Post Pavilion in Columbia, MD, The Gorge Amphitheatre in George, WA, and the Hollywood Bowl in Hollywood, CA.

Bethel Center for the Arts

So what venues are the have the most demand to see Phish at this summer? Well, SeatGeek has your answer. All information has been analyzed using SeatGeek’s proprietary and comprehensive ticket data.

Below, is a chart which shows the top 10 venues to see Phish at this summer. The results are based on average ticket price. 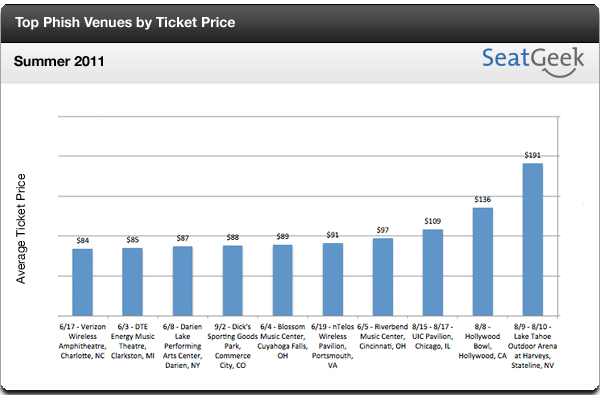 As you can see from the graph above, the venue with the highest demand to see Phish in summer 2011 is the Lake Tahoe Outdoor Arena at Harveys in Stateline, NV where Phish will be playing a 2-night run. The average price of a ticket for this run as of 6/15/2011 is $191. Note that Watkins Glen has been excluded from this list because it is home to Phish’s festival, Super Ball IX, and not a concert or series of concerts.

SeatGeek has also generated a graph that shows the average ticket prices by concert date for Phish’s Summer 2011 tour. This graph is shown below: 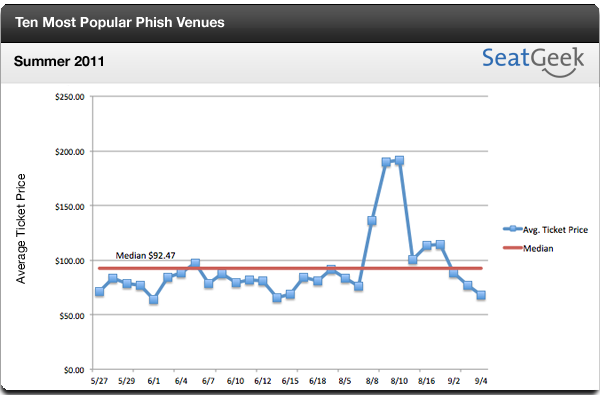 The list of Phish Summer 2011 concert dates and venues is shown below, and can be used as an easy reference of concert date to venue. Once again, Watkins Glen has been excluded because it is hosting a festival and not a concert.

As seen on the graph above:

Check out SeatGeek for tickets to the rest of Phish’s summer tour, and for all of your Phish ticketing needs.

Check out these related articles: