It’s been 30 years since Joe Montana famously hooked up with Dwight Clark to complete “The Catch,” but it feels almost as long since the San Francisco 49ers were playing football this deep into January. The 49ers haven’t claimed a post season appearance — let alone a winning season — since 2002, so fans in the Bay Area aren’t taking the occasion lightly. Of the four divisional matchups set for this weekend, tickets to see the Niners take on the New Orleans Saints in Candlestick Park are currently seeing the highest demand averaging for $404. Games featuring the Baltimore Ravens vs. Houston Texans ($341), Denver Broncos vs. New England Patriots ($295) and New York Giants vs. Green Bay Packers ($266) are all seeing much lower figures.

Average ticket prices have been holding right above $400 for the past week. With over 1000 active listings for the game on SeatGeek, it appears that brokers are looking to cash in and are flooding the market with tickets, but it still hasn’t tempered overall prices. Despite the high prices, fans are rising to match that supply with strong demand for tickets. 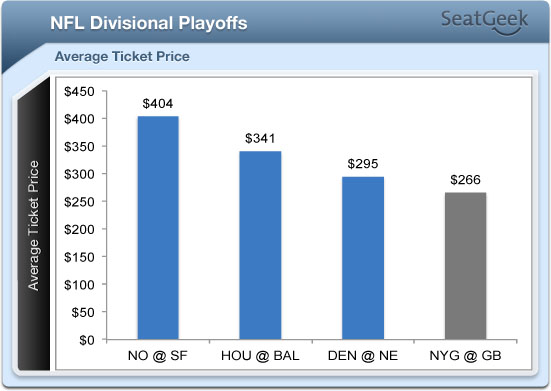 It’s not everyday that you see an NFL head coach being sampled in hip hop, so please take a moment to enjoy Niner Nation’s new unofficial theme song.