A Look at Yankees and Red Sox Ticket Prices in 2011

In honor of the millionth (just kidding) meeting between these two storied teams, we decided to take a look at our data from the MLB regular season this year and compare the Red Sox and Yankees ticket prices.

The two teams are currently battling for first place in the extremely competitive American League East. The teams are both tied for first right now, though the Yankees have played two less games. The Sox sit at 34-26 while the Bronx Bombers have a 33-25 record.

The teams began a three-game series in New York on Tuesday night, with the Red Sox taking the first contest by a score of 6-4. The teams will play again tonight and tomorrow. If you’re looking to go to tonight’s game and need some last-minute tickets, the average price right now is $87 with seats as cheap as $16. Tomorrow night’s game is a bit more pricey, coming in at an average of $137.

Looking at our data for this season as a whole, this is what we’ve found: 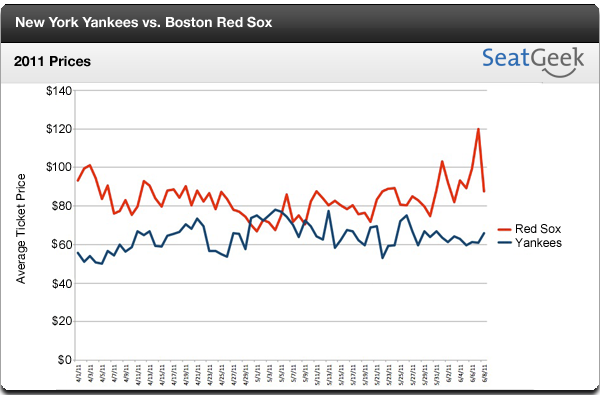 As shown by the graph, Boston’s ticket prices pretty steadily declined from the start of the season likely due to their very disappointing start after bringing in stud players Adrian Gonzalez and Carl Crawford. However, prices have picked up as the Red Sox have done the same with their play.

Overall, the Yankees’ average ticket prices have sat below the Red Sox’ likely because of the teams’ stadium capacities. Fenway Park seats about only 37,000 while the newer Yankee Stadium can hold around 52,000.

For more information on MLB ticket prices, make sure to take a look at our MLB Ticket Price Leaderboard.

How to Get Tampa Bay Buccaneers Season Tickets