Football season is almost upon us. Training camps are preparing to open their doors, players are gearing up for the season, and Brett Favre is throwing passes to high-school kids while cursing Lebron for stealing his thunder with “the decision” of the summer. With all this going on, We here at SeatGeek decided to take a look at all 32 NFL teams and rank them based on past performance and fan support, as determined by secondary market ticket prices.

Fan support is of paramount importance to NFL franchises. A rabid crowd can act like a 12th man, flustering opponents and spurring their team to victory. With that in mind we decided to gauge fan support for all 32 NFL teams in the best way possible, by analyzing 2010 secondary market ticket sales. Secondary market ticket prices reflect how fans feel about their squad, through how much hard earned money they are willing to throw down to watch their team play. Logically, higher prices would correspond to higher expectations, and vice-versa. Fans who purchase tickets to their favorite team’s games on the secondary market would be expected to pay more to see a higher quality product on the field, and less for a lower quality team. Therefore, utilizing a complex formula, devised by our resident sports geeks, that takes into account average 2010 ticket prices, and 2009 performance on the field, named the SeatGeek Rating Scale, (S.R.S) we predicted the relative success of each of the 32 NFL teams for this upcoming season. Over the course of the next few weeks, we will break down, division by division, every team in the NFL culminating with our playoff and Super Bowl predictions.

The AFC East was one of the most confusing divisions in football last year, with experts quibbling over what to expect all summer long. The Dolphins had come out of nowhere to win the division the previous season, the Patriots were still the Patriots, the Jets were taking the field with rookies at quarterback and head coach, and the Bills had made a big splash by signing Terrell Owens. However, as the season progressed it became clear that the division was going to be decided between the Pats and the Jets. The Patriots narrowly beat out Gang Green for the division crown, but the Jets sneaked into the playoffs at 9-7 as a wild card, and promptly stomped over the Bengals and Chargers to advance to the AFC championship game where they fell to Peyton Manning and the Indianapolis Colts. Because we love ticket data so much here at SeatGeek, we decided to take this opportunity to delve a little deeper into the NFL’s most recent season, and also take a look forward to the upcoming season of NFL football. 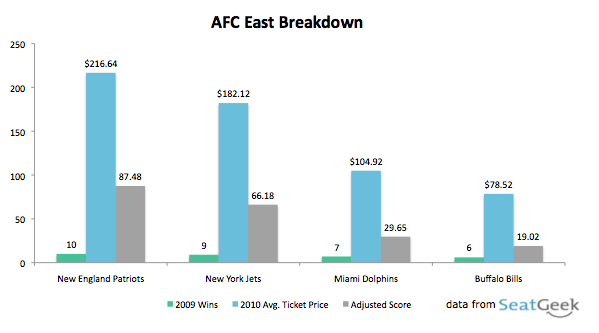 The above graph compares all four AFC East teams across three categories: how many games they won in 2009, what their average ticket price for 2010 tickets is so far, and their adjusted score on the super scientific SeatGeek Rating Scale. (SRS) As you can tell, in this division there is a clear correlation between 2009 wins, and how much fans are willing to pay for 2010 single game tickets. 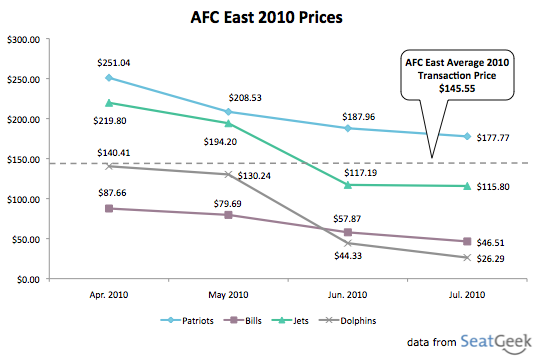 In 2008, the Buffalo Bills won 7 games, the following season fans paid an average of $54.69 per ticket, the lowest in the division. However, so far in 2010, Buffalo fans are willing to spend $78.52 on tickets to see their beloved Bills play, despite the fact that the Bills lost more games last year than they did the previous season. However, before jumping to the conclusion that Bills fans’ ticket purchases are unrelated to team performance, keep in mind that our 2010 data by definition only includes data from April. As the season draws nearer, and then during the course of the games, prices could fluctuate significantly.

In order to gain a better understanding of how NFL ticket prices fluctuate over the course of a year, we broke down this data even further. 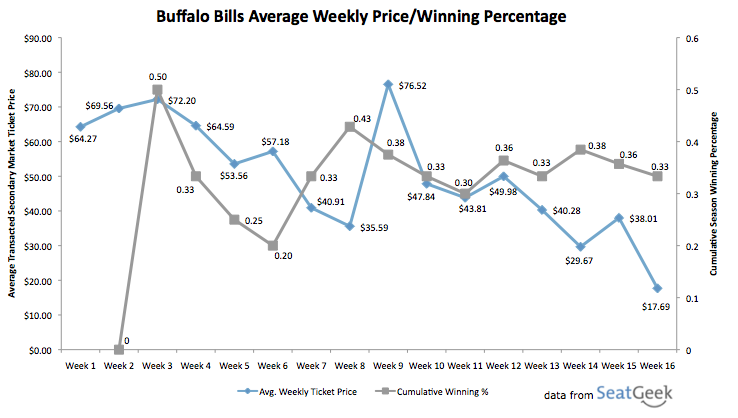 We plotted average price for the week preceding each game of the 2009 season, against the cumulative winning percentage of the team for that season up to that point. For example, Bills tickets traded at an average price of $72.20 leading into Week 3 of the season, following a Bills win that put them at 1-1 for the year; a .500 winning percentage that the Bills would never again achieve for the remainder of the season. Tickets for the final week of the season traded for an exceedingly low price of $17.69. This is probably due to a combination of factors: The Bills were already eliminated from playoff contention; their opponent was the Indianapolis Colts, who had announced they would be resting many starters in preparation for the playoffs; and to top it all off, the game time weather at Ralph Wilson Stadium was a balmy 12°F and snowing.

Due to the Bills’ relatively lackluster performance on the field, as well as in the ticket market, they received an S.R.S score of 19.02, good enough for fourth place in the division, and 29th in the entire league.

Sorry Bills fans, but it takes more than getting rid of Terrell Owens to improve your team. The Bills pool of talent is still the worst in the division by far. It’s going to be another long, cold winter in Buffalo.

The 2008 Miami Dolphins came out of nowhere to go 11-5 and win the AFC East for the first time since the year 2000. In 2009 however, the team lost starting quarterback Chad Pennington early in the season, and had to move forward with the untested youngster Chad Henne. The Dolphins under Henne played well the majority of the year, but lost their final three games to finish 7-9 and out of the playoffs. Now let’s take a look at the data. 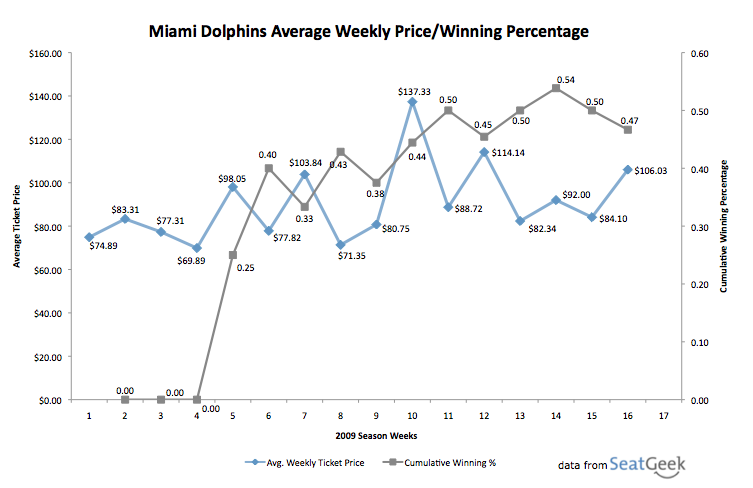 As opposed to Buffalo, over the course of the 2009 season season Dolphins prices rose from an average of $77.88 in September, to $85.63 in October, $92.24 in November, and $95.13 in December. This difference can possibly be attributed to the fact that as the season progressed the Bills dropped further and further from contention, while the Dolphins, although eventually falling short, were deeply immersed in a playoff race.

Uncertainty on both sides of the ball, along with a below .500 winning percentage and relatively lackluster 2010 ticket sales combine to give the Dolphins an S.R.S score of 29.65. That places them in 3rd in the AFC East, well behind the Jets and Pats, and 23rd in the league. Better luck next year Dolphins fans, because with that score, the ‘fins won’t even be sniffing the playoffs in 2010.

The Rex Ryan era began with a bang last season, as the Jets advanced to the AFC championship game for the first time since the Vinny Testaverde led team of 1998. With the number one ranked defense, and rushing offense in the NFL in 2009, the Jets won using the old strategy of running well, and stopping the run well. This year the Jets faithful have even higher hopes for their team; a result of multiple high profile acquisitions such as cornerback Antonio Cromartie, former Super Bowl MVP Santonio Holmes, and 5 time Pro Bowler and former league MVP Ladanian Tomlinson. 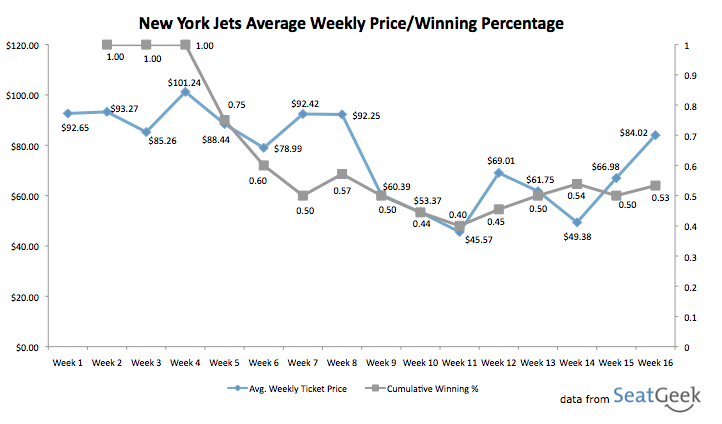 There are some interesting trends in the week by week breakdown of the Jets’ 2009 campaign. For example, prices spiked in the week preceding the Jets’ week 4 match-up with the Saints, following the Jets’ impressive 3-0 start. Then, over the course of the next two weeks, prices dropped following consecutive Jets’ losses. It is also interesting to see the increase in ticket prices during the final two weeks of the season, as the Jets fought for a playoff spot. In fact, there is a relatively significant positive correlation between the Jets’ winning percentage during a week, and the average ticket price from that week. In fact, the correlation coefficient of the Jets’ weekly average price compared to their cumulative winning percentage up to that point, was 0.68, on a scale of -1.0, denoting a perfect negative correlation, to 1.0, denoting a perfect positive correlation, with 0 meaning no correlation at all. In contrast, the correlation coefficients of the three other teams in the division were -0.21 for the Bills, 0.36 for the Dolphins, and -0.03 for the Patriots. This higher score seems to indicate that Jets fans were much more influenced by team performance in their ticket purchasing habits than fans of other teams in their division.

In the case of the Jets, tickets sold for the 2010 season are significantly higher than those sold for last season, excluding January tickets sold to playoff games. Clearly this is a reflection of the higher expectations of the fans, and this translates into a healthy S.R.S score of 66.18, slotting them in at 2nd in the division, and 10th in the league, good enough to snag the #5 seed in the AFC playoffs. So enjoy it Jets fans, because them being the Jets, and therefore prone to every misfortune, mismanagement, and miscue possible, success will not last long.

The Patriots have consistently been one of the best teams in the NFL for almost a decade now. The Brady-Belichick dynasty has produced 3 Super Bowls championships, and division titles in 7 of the last 9 years. After winning 11 games in 2008, but failing to win the division due to the resurgent Dolphins, the Pats returned to their familiar place atop the AFC East last season. Despite an aging core of veterans, this year should be no different for the perennial Super Bowl contenders. 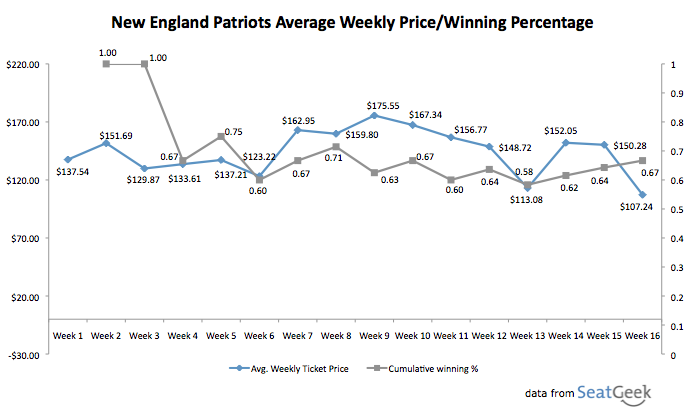 The Patriots had by far the highest average ticket price throughout the 2009 season of any team in their division. In fact, the lowest weekly average price for the Pats last year was $107.24, a figure that the Bills and Jets didn’t reach even during their most expensive weeks. Their season average price of $144.09 was almost twice the Jets’ average of $79.73, and almost three times the Bills average price of $54.69! Clearly Pats fans pay a premium to see their team play. However, the price does not seem to fluctuate in any particular pattern relative to the more micro-fluctuations in team performance, with a correlation coefficient of only -0.03, basically rounding to 0, meaning there was absolutely no relationship between winning percentage and weekly average price during the Patriots 2009 season.

Due to their stellar performance on the field, and their rabid fan-base’s willingness to pay a premium for tickets, they Patriots have amassed an S.R.S score of 87.48, tops in the division, and fourth best in the entire league. Congratulations Patriots fans, once again you’ll be rooting for your team at snowy Gillette Stadium in January.

The AFC East is one of the most exciting divisions in football, and also one of the best values, with an overall average ticket price of $145.55 so far in 2010, the third cheapest division in football.

After taking all the stats into consideration, our fearless predictions are:

Stay tuned to SeatGeek for more of the latest NFL trends, and for the rest of our NFL previews.

How to Get Tampa Bay Buccaneers Season Tickets