The New York Yankees and Alex Rodriguez wrapped up their road trip Sunday with a disappointing loss to the Tampa Bay Rays at Tropicana Field. Equally as disappointing (especially for Rays fans looking to cash in on catching A-Rod’s 600th home run ball) was that A-Rod was not in the starting line up, and struck out in his only at bat. He’s still stuck at 599 career home runs, yet he heads back to Yankee Stadium hoping to hit the milestone home run in front of the home crowd.

For SeatGeek and Hit Tracker, we’re back to square one. Our original prediction for where A-Rod may hit his 600th home run was for Yankee Stadium. “The Money Seat” is Section 135, Row 18, Seat 6, and the most likely section in which A-Rod may hit the ball is Section 136. Click here to see the full report!

For everyone that only took a guess at Yankee Stadium, you have lucked out now that you have a second chance. To everyone else, you should take a guess at the section the ball will land for a shot at free stuff.
Enter Now–> Redirect to Twitter to Tweet this and enter! or Redirect to Facebook to ‘Like’ and enter!

For many, A-Rod’s coverage of 600 has been frustrating, since 600 is really only a milestone since it’s a round number. People have been asking what makes 600 different than 601, or 650, or any of the other home runs A-Rod hits in the future.

We spoke with our friend Ross over at NYY Stadium Insider, a Yankees fan advocacy blog, to get his thoughts on this whole situation. Ross, who is a Yankees season ticket holder and diehard fan thinks that the allure of the situation is due in large part to the money involved with A-Rod’s 600th home run. Rodriguez’s 500th HR ball sold for $103,000, and it is reasonable to expect a similar resale price for 600.

For fans like Ross, whose seats are in the upper deck, the story is fun to follow, but he doesn’t care too much about 600 itself, since he has no chance of catching the ball in his seats. He knows that A-Rod has better milestones to look forward to, such as hitting career home run 757 and breaking Barry Bonds’ home run record, and so the most special thing about this home run is its value.

Unfortunately, Yankee Stadium isn’t quite as fan friendly of a stadium for catching 600 as other stadiums, especially when compared to Progressive Field, where the Yankees recently played. The problem with Yankee Stadium is that there are no standing room only areas to hang out and watch the game, unlike the Home Run Porch at Progressive (in our interview with ball snagging expert Zack Hample, we discussed this in more detail). Also, strict security rules prevent fans from walking around the stadium, and from catching the glimpse of the game from either Section 135 or 136 (where tickets are $90 face value), which are the top two most likely sections for A-Rod’s 600th HR ball to land.

For fans, if you want to have the best chance at catching A-Rod’s 600th and cashing in, you’ll have to make sure you get a seat in one of the most likely sections, as Ross explains in one of his blog posts. “There is no freeloading at Yankee Stadium,” he says.

The average ticket price for the Yankees-Blue Jays series is $63, which means fans are willing to pay around $63 for tickets to see the Yanks play. Yet, average listing price for the three game series is only $49, including two tickets in Section 136 for $77 each (81 percent of face value)! Click on a game below to see SeatGeek’s ticket deals: 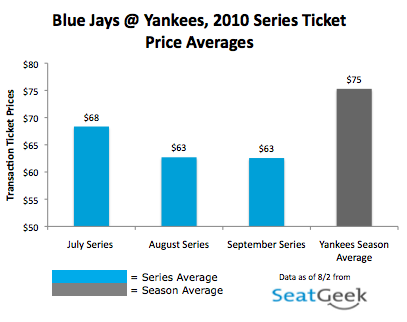 Presumably, few expected A-Rod’s home run chase to last this long. As a result, the price of tickets for the Blue Jays games have not spiked, and fans can still get reasonably priced tickets to witness the milestone and maybe even catch the ball – if he ever hits it!

When A-Rod actually hits his 600th career home run, best of luck catching the ball. Be sure to email justin[at]seatgeek.com with any inquiries, and don’t forget to follow us on Twitter @SeatGeek.

Special thanks to Ross from NYY Stadium Insider for his thoughts on A-Rod’s 600th home run. Ross can be found on Twitter @StadiumInsider.