Mid-Summer Meeting Has High Prices for Athletics at Giants

While the Giants-Athletics series is always one of the most anticipated of the year in the Bay Area, this year’s games are seeing a particular high demand, resulting in higher ticket prices. Saturday’s game is the most expensive, with an average resale price of $102, while Sunday has an average price of $87 and Friday has an average price of $84. This series is more expensive than any other series between the two squads in the past five years. When the teams play in Oakland in late September the current average resale price for that series is $66.


Saturday’s game will be the third most expensive Giants home game of the year, behind only the home opener against the Rockies ($203 average resale price), and the game against the Diamondbacks when the World Series rings were presented ($128). All three games of the series are the most expensive Athletics away games of the year, topping a trip to Boston in June when the average resale price was $79.

Ticket prices do range throughout the ballpark for the series. Fans who want to sit in the lower level around the infield will pay an average of $203 per game, with prices going up for closer seats and dropping slightly for seats in the rows further back. The cheapest seats in the park are those in the upper deck in the outfield, which have resold for an average price of $54 per ticket per game. 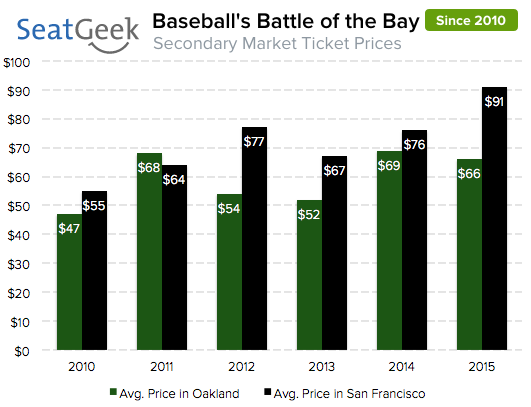 This weekend’s games will be cheaper than the last time the 49ers and Raiders met in the regular season, in 2014 in Oakland. The average ticket for that game resold for $192, which is more than double the price of Friday and Sunday’s games, and nearly double the price of Saturday’s game.