Yesterday we blogged about how the Boston Bruins falling into a 2-0 hole against the Vancouver Canucks had affected ticket prices for Game Three. We also (wrongly) predicted that Game Three would be tightly contested based on the previous two games. Fortunately for the Bruins, we couldn’t have been more wrong.

Rome received a five-minute major and was thrown out of the game for the late check.

The game was scoreless through one until Boston defenseman Andrew Ference opened the floodgates just eleven seconds into the second period. The Bruins would go on to score five straight goals on Vancouver’s Luongo, eventually tallying another three to embarrass the Canucks 8-1.

The big seven-goal win has provided Bruins fans with a glimmer of hope after being in a bleak position yesterday morning. Just looking at our ticket data since yesterday proves it — tickets to Wednesday’s Game Four have spiked 14% from an average price of $1187 on Monday to $1350 today: 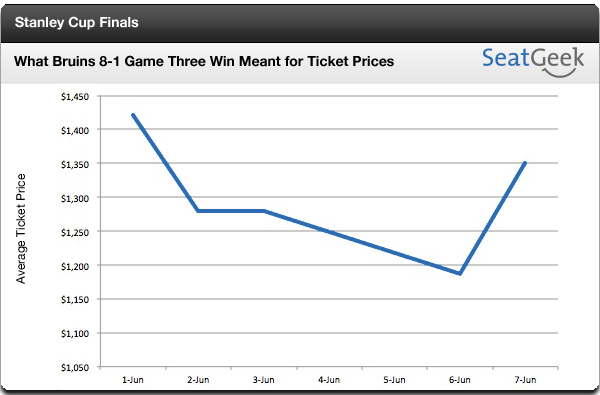 Looks like the Boston faithful is back on the bandwagon!