Most fans support the home team, and allegiances are tough to break. Of course there are always contrarians, and 27% of Americans were born outside their state of residence. [1] But just how many fans root for the home-team?

On SeatGeek, users can track teams:

I’ll use this as a proxy for fandom. We’re able to record the latitude and longitude of most of our users, so we can use this to calculate the distance from the fan to their team’s home stadium / arena. I’ve calculated this distance (using the Haversine approximation) for all fans of the four major sports. To avoid any outlier effects I’ve excluded any fans outside of the Americas (which represent about 1% of the total). 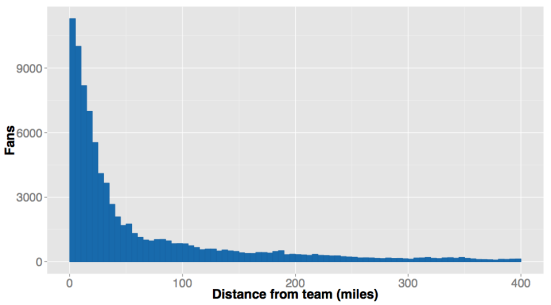 On first glance, the distribution is not surprising. The majority of fans live quite close to their teams, with over 50% living within 36 miles. However the tail is quite long (or fat). 25% of fans are over 178 miles away, and 10% are over 830 miles away.

But what happens when we break it down by team? We could cut this in any number of ways: average distance, median distance, etc. I’ve decided to use the percentage of fans that live over 100 miles away as a measure of their out-of-market support.

The Cardinals top the list. This is presumably the result of a bandwagon effect, as they have appeared in two of the last three World Series. Washington, city of transplants, has the least out-of-market support.

The NBA falls a bit more in line with expectations. The top three teams are the teams that have made the NBA Finals over the last three seasons. In last place is Brooklyn, a borough team that is newly established in that location.

The Green Bay Packers head the list, as the team’s fan base is all over Wisconsin. In particular, Milwaukee happens to be just over 100 miles away, slightly skewing the results: 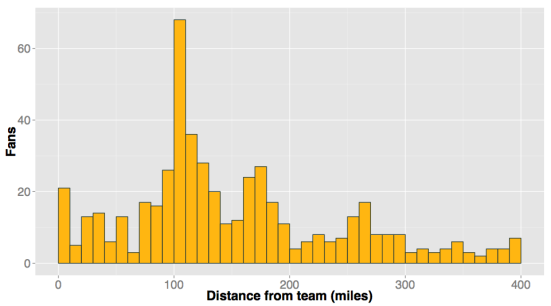 The Jets and Giants round out the bottom, despite the Giants’ recent Super Bowl victory.

Canadian teams dominate the top half of the list – this is more likely a result of SeatGeek’s predominantly American userbase rather than any underlying geographic distribution. Otherwise there is not much variation. And no list of team metrics would be complete without the poor Islanders at the bottom…

Large East coast cities like Philadelphia, Washington, and New York, who have all had limited success in recent years (with the exception of this year’s Rangers), are near the bottom of most of the lists.

Poring over these histograms reveals some interesting patterns, including the curious case of the Cincinnati Reds: 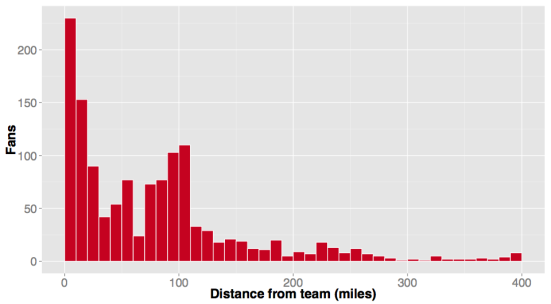 100 miles is the point at which most of the distributions drop off. So what explains the peak there for Cincinnati? If we take a look at the geography of Southwestern Ohio, it’s not surprising at all! It turns out there are four major metropolitan areas nearby without baseball teams, and they all happen to be about 100 miles away:

In a future post, we’ll dig deeper and consider the inverse question – analyzing the team preferences of fans based on the fan’s location. We’ll see if any interesting patterns on a smaller scale, within major metropolitan areas.

The above graphs were created using Hadley Wickham‘s ggplot2 package for R, as well as the ggmap package for integration with Google Maps.