Prior to this weekend’s series, the most expensive A’s home series we’ve recorded during the regular season was a four-game set against the Yankees from July 19-22, 2012. Tickets for that series were resold on the secondary market for an average of $69 apiece. By comparison, tickets to these upcoming three games are $33 and 48% more expensive on average.

This season, A’s tickets are more expensive on the resale market than we’ve ever seen at an average price of $59 per ticket, up 25% from $47 last year. This weekend’s series against New York, however, is 73% higher than that season average. The next-most in-demand home series on the A’s schedule is the June 19-22 series against Boston, which is drawing an average price of $79 per ticket. 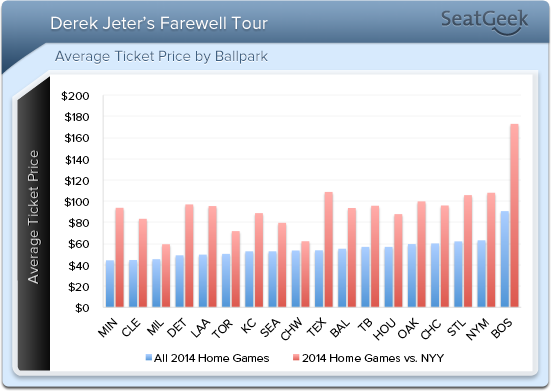 The cheapest pair of tickets for Sunday’s series finale is $50 in the bleachers, nearly twice the face value of $27. On the high end, we’ve seen some fans spend more than $650 per ticket on Diamond Level seats, which are available at a face value of $187 per ticket in a season ticket package ($15,170 per seat for the full season).

Based on secondary market demand, Jeter’s last games in Oakland are a considerably bigger draw than Mariano Rivera’s final appearances at the Coliseum. Fans paid an average of $63 (though some seats were available for as little as $13 each) to attend Rivera’s final game against the A’s on June 13, 2013, whereas the going rate on the resale market for Jeter’s last game on Sunday is $103 per ticket. That translates to a $40 or 63% premium for Jeter’s farewell.

We’ve seen an increase in ticket prices for Yankees road games across MLB this season as a result of Jeter’s farewell tour; the average price of a ticket to see the Yanks on the road is up 25% year-over-year from $81 in 2013 to $101 this season. Among the Yankees’ American League road series, however, their trip to Oakland is the 3rd-most expensive behind only games against the Rangers at Globe Life Park ($109 average ticket price) and those against the Red Sox at Fenway ($173).