Conventional wisdom states that baseball fans are a fickle bunch. It takes very little for a team to alienate a large fan base when losing, or conversely to capture the hearts and minds of a city when on a winning streak, and nothing captures the imagination of baseball fans like a no-hitter. There are few professions whose performance can be quantified as precisely as that of a major league baseball player, and in a game based on failure , (even the best hitters fail to get a hit 65-70% of the time) it is rare to see a player achieve absolute perfection. On that day, there is absolutely nothing the pitcher could have done better than he did. Perfect games and no hitters occur so rarely there have only been 20 perfect games in Major League history dating back to 1875. Because of the unique and exciting nature of no-hitters, they are often front-page news the following day, garnering a lot of attention from local and national media outlets alike. Here at SeatGeek, we looked over our data from the back-to-back-to-back no-hitters that have occurred over the course of the 2010 season, to determine whether the buzz generated by a no-no manifested itself in higher ticket prices for the following games, starts, or home starts for the pitcher.

The first of the three no-hitters occurred on April 17th 2010, and was thrown by Colorado Rockies hurler Ubaldo Jimenez, on the road against the Atlanta Braves. The average ticket price for that game was $32.69. Jimenez’s next start was at Washington, and average ticket price was $42.96. His first home start following the no-hitter was against the Diamondbacks the following Monday, and tickets sold for an average of $33.98. The average ticket price for a Colorado Rockies game in the week following Ubaldo’s no-hitter was $47.67, as opposed to an average price of $51.77 for a 2010 Rockies ticket sold March 1st through June 3rd 2010. 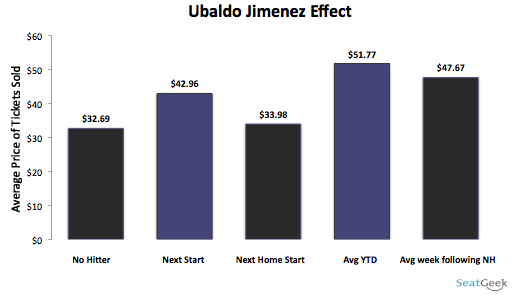 From looking at this data it does not appear that pitching a no-hitter increases interest in a pitcher’s subsequent start, or interest in the team for the week following the perfect game. However let us now take a look at the two perfect games thrown in 2010.

On May 9th 2010 Oakland youngster Dallas Braden took the hill and promptly sent 27 straight Tampa Bay Rays back to the dugout hit-less for the first perfect game in 2010, and the 19th in Major League history. 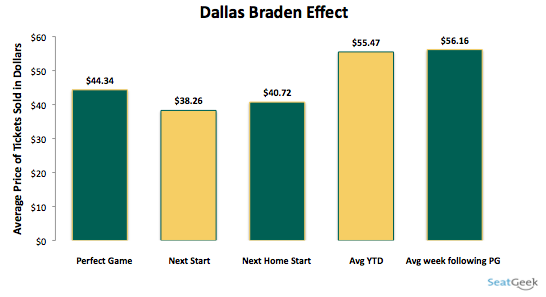 Disregarding the price of a ticket to the no-hitter, (because no fan knows when purchasing a ticket that a no-no will be pitched) it appears that tickets for Braden’s following start, (a Friday night game in Anaheim) and his next home start, (Wednesday May 19th vs. Detroit) both traded for a lower price ($38.26 & $40.72 respectively) than the average price for an A’s game this season through June 3rd ($55.47). Similar to the Jimenez case, Braden’s perfect game did not radically alter A’s ticket prices in the subsequent week. 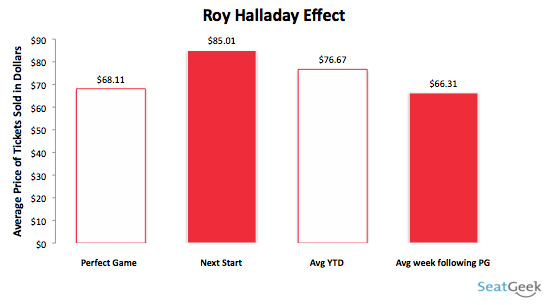 (A few notes regarding the Halladay’s data set. He is next slated to start at home Friday night June 4th against the San Diego Padres. The game has yet to take place, so the average price for a ticket sold for that game may still fluctuate. Additionally, as a week has not yet passed since Halladay’s perfect game, the data in that column only consists of 6 days of Phillies ticket sales, up through June 3rd.)

Analyzing these figures in conjunction with our data from the previous no-hitters, we can draw some interesting conclusions.

1. Phillies tickets, on average, have traded at substantially higher prices than either Rockies, or A’s tickets so far during the 2010 season. This is not surprising due to the Phillies’ large, baseball-crazed market, roster full of big-name players, and recent success, having reached the World Series the past two seasons.

2. Despite the significant media buzz that inevitably surrounds the throwing of a no-hitter or perfect game, there appears to be very little correlation between no-hit performances and immediate fluctuations in ticket prices. This is not to say that no-hitters are completely irrelevant in the determination of subsequent ticket prices, only that more mundane factors such as day of the week, weather forecasts, time of day, and opposing teams matter much more than a pitching performance for the ages.Do No-Hitters Affect Ticket Prices?