Big Series for the Red Sox at Yankee Stadium this Weekend 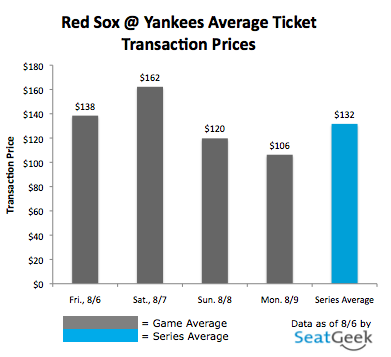 With the news that Kevin Youkilis is out for the season for the Boston Red Sox, baseball pundits have deemed this series a do or die series for the Sox against the rival New York Yankees this weekend. As the four game series at Yankee Stadium commences, Boston is six games back of the first place Yankees, 5.5 games behind the Tampa Bay Rays for the Wild Card, and in the midst of a lethal stretch where they play seventeen games in a row, including their next ten on the road. Yet, many wonder if the Sox can bounce from losing Youk and make up pivotal ground in the AL East.

Although it is only August, this series at Yankee Stadium should have a playoff-like atmosphere, as a series win by the Yankees could effectively end the Red Sox season, while wins by the Sox could make it an even tighter three-team division race. Given the magnitude of this series, Here at SeatGeek we wanted to see how high ticket prices were on the secondary market for each game.

Generally, Yankees vs. Red Sox tickets are going to go for more than any other ticket, as demand is very high for this historic rivalry. Yet, it seems as if the importance of this series is driving the ticket prices up even more than usual.

Tickets for this series are the most expensive for any series at Yankee Stadium this season. Compared to the other two series versus the Red Sox in NYC, this series is 26 percent more expensive than when they played in May, and equally as expensive as their series in September. Yet, the series in September is the last series the Yankees play at home this season (before the playoffs), and presumably the two teams will be in a heated playoff race then, with just a hand full of games left in the season. Thus, for tickets to be at as high of a price for this upcoming series compared to the series in September is a bit surprising. 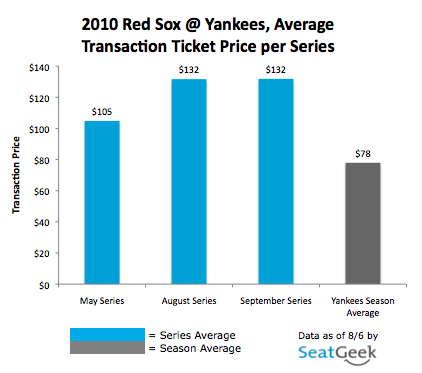 Meanwhile, Yankees ticket prices have skyrocketed in the past week, and have taken over the top spot in all of the MLB.

If you are in the greater New York area and were hoping to catch one of these games, but are unable to find good tickets on the primary ticket market, don’t worry, SeatGeek’s got your back. Click below on one of the games to see an aggregation of the best ticket deals on the web: