The ‘Dog Days of Summer’ are coming to a close and not surprisingly, October is on the horizon again for the 2010 New York Yankees. With strong and reliable pitching, the emergence of Robinson Cano, Nick Swisher, and Brett Gardner, and the consistency of Mariano Rivera and Derek Jeter, the Yankees have put themselves in the driver’s seat in both the AL East, and the AL Championship (http://es.pn/bcuDuH).

Although they share a 5.5 game lead with the Tampa Bay Rays over the Boston Red Sox (8/19/2010), the Yankees have set themselves up for an all but sure shot at the World Series this October (I’m knocking on wood here, fans).

Despite all this great news for the Yankees, here at SeatGeek we have noticed even greater news for Yankees fans. The average ticket price for upcoming Yankee home games continues to fall. The Yankees ticket prices have had the highest average value for most of this season, yet they have recently slipped to #10 of the 30 teams with an average price of $49 per ticket, the lowest it’s been all season. This might be because of the upcoming road trip or the fact that a majority of the Yankees opponents for the rest of the year aren’t contending for a post-season berth. 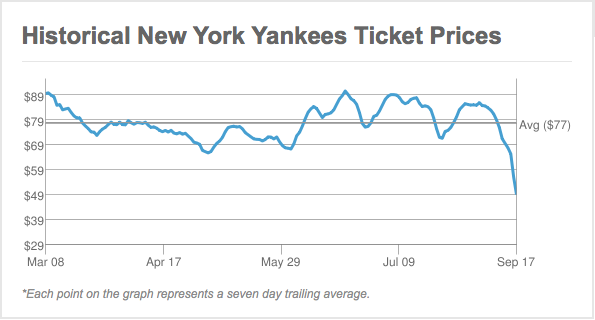 This is great for cash conscious consumers who have yet to see a Yankees game this season.  If you haven’t, now there is more of a reason to than before — strike while the iron is hot!  Surprise your lady-friend, be a hero to your kids, wow your friends with some great seats. Of the Yankees’ final 21 home games 14 of those are against teams that you can all but write off for a post-season berth.  We’ve sorted the remaining home games by average cost of a ticket, and there are some relatively affordable games to see this September. 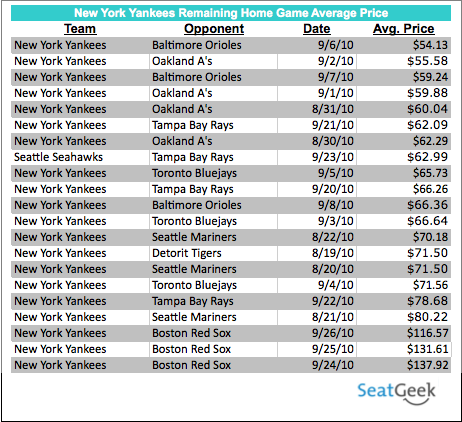 As you can see, the most affordable upcoming Yankee home games coming up are:

You can sort through the remaining Yankees home games and  buy tickets here .  Tickets for today’s game against the Detroit Tigers can be had for as low as $10.00 a ticket

Conversely, if you are looking to make some coin in the final month of the season, you better already have a supply of Yankees vs. Red Sox tickets.  This is the last home stand for the Yankees, and as expected, these tickets have the highest average price. SeatGeek is forecasting that tickets to these games will sell for an average price of $137.92, $131.61, and $116.57 respectively.

I am new to the team here at SeatGeek and want to pass a big thanks on to the rest of the guys here –Thanks for the opportunity to work with you.  If anyone has any feedback or questions about the post, leave a comment or shoot an email to alex@seatgeek.com, and as always, remember to like us on facebook, and follow us on twitter @SeatGeek and @SeatGeekMLB