Barcelona vs Chelsea Highest-Grossing Match Since 2011

With an average resale price of $133 per ticket, Tuesday’s match between Barcelona and Chelsea is the second most expensive soccer match in the DMV since 2010.

Tickets to the July 28 International Champions Cup match between FC Barcelona and Chelsea FC are averaging $133 on the secondary market. That’s the second most expensive 2015 ICC match in America, trailing only the Man Utd – Barcelona match in San Francisco, which is averaging $258. It’s also more expensive that the most expensive D.C. United match since 2010 — a match against the Columbus Crew in June 2014 — that averaged $80 on the secondary market. 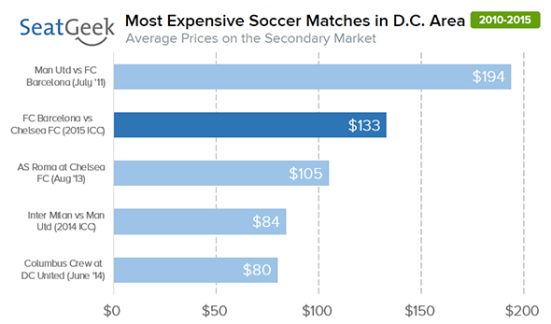 Since Barcelona announced that Messi and Neymar would not be participating in the American leg of the ICC, the median listing price has actually risen from $189 to $203, and the get-in price has risen from $90 to $108. Typically, prices for sporting events fall in the days leading up to the event, so this increase is unique, especially with the superstars not playing.