One NFL matchup you won’t want to miss this season is the game between two NFC East rivals: the Dallas Cowboys at Washington Redskins. With both teams currently in the hunt for the division, this exciting tilt could have huge implications come playoff time.

On Sunday, October 21, the Dallas Cowboys head to the Redskins’ home field for an important Week 7 game. Kickoff is at 4:25 PM EST at FedEx Field in Landover, MD.

Located just five miles east of Washington, D.C., FedEx Field boasts one of the largest capacities of any NFL stadium with 82,000 seats. 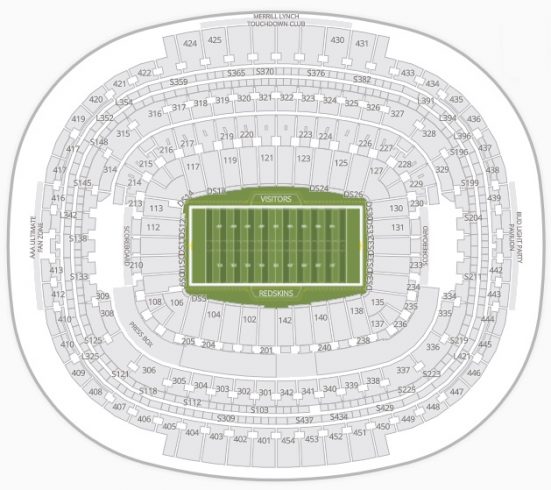 It offers the prestigious Joe Gibbs Club Level as well as the George Preston Marshall Lower Level. Each of these seating areas honors a man with historic, influential ties to the organization and also provides Redskins fans with amazing views of the venue.

Tickets to the October 21 Cowboys v Redskins game are currently available, starting at $178 each. Buy them through SeatGeek and save $20 off your purchase by using code NFL20 at checkout. Browse tickets here, or view them below.

If you’ve been following the NFC East division this season, the title is 100% up for grabs. None of the four teams have been eliminated from contention, but none of them have pulled away in the race either. Currently, the Washington Redskins sit atop the division, but the Cowboys and the Eagles are right behind them, only trailing by half a game due to Washington having a bye week. This October 21 game could have a huge impact on the division, and that alone makes it one worth watching.

Dallas, led by the strong running of Ezekiel Elliot, has shown an ability to score at times, but will need to generate a lot of offense to keep up with Alex Smith and the Washington Redskins. If the Cowboys want to win this game, they’ll need multiple touchdowns on the ground from Elliot and quarterback Dak Prescott will have to find a receiver to count on for four quarters.

On the other side of things, the Redskins have demonstrated an ability to explode on the offensive end, putting up 31 points on the Packers and 24 on the Cardinals. However the team still hasn’t completely found its identity with Alex Smith under center. If not for the solid running of veteran Adrian Peterson, Washington might not even be in the mix for the division title at this point.

In this game, both teams will rely on the running game to score points, but the winning team will feature whichever quarterback performs better in the late-game situations. This game will likely go down to the wire, and that’s all the more reason to watch.

As we inch closer and closer to the midpoint of the NFL season, the opportunities to watch your favorite team in person are diminishing! Don’t miss out on your chance to get great tickets via the SeatGeek app. Looking to sell NFL tickets? You can do that too! List them here.