The Grey Cup: It’s Canada’s Spelling, Not Mine

You know that kid that was part of the popular group in high school, and you could never figure out why? You know, he wasn’t good looking or particularly good at sports like the rest of them, but he also wasn’t mean or douche-y like the rest of them? That’s the Grey Cup.

See, the Grey Cup shouldn’t be part of the popular crowd, but it is. How do I know? Because today, Grey Cup tickets are going for an average of $405, and are more in-demand than either NFL conference championship last year. In other words, professional football’s ugly duckling little brother costs more than its big brother’s second and third biggest games of the year. Last year’s AFC Championship Game in Foxboro drew an average resale price of $397 per ticket, and the NFC Championship Game in Atlanta came in at $316 per ticket. Yeah, Canada’s Super Bowl is outperforming everything in the NFL but the Super Bowl. What the eff? 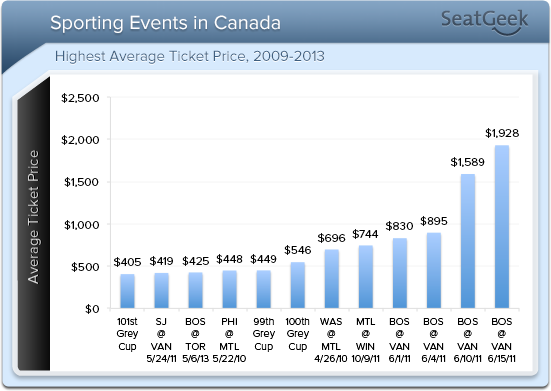 And shall we add a little insult to injury? The 101st Grey Cup in Regina, Saskatchewan, this Sunday is actually the least expensive of the past three Grey Cups. Prices are down 25 percent from last year’s game between Calgary and Toronto – played at the Rogers Centre, home of the Argonauts – which drew an average resale price of $546 per ticket. The 99th Grey Cup, held in Vancouver, saw an average resale price of $449 per ticket.

Sunday’s game is the 12th-most in-demand sporting event we’ve tracked in Canada since we began monitoring the secondary market in 2009. The graph above shows those 12 events and their average resale price, with Game 7 of the 2011 Stanley Cup Finals in Vancouver leading the way at $1,928 per ticket. Aside from the past three Grey Cups, all the events listed are NHL games; they include the Canucks’ four home games in the 2011 Stanley Cup Finals, the new Winnipeg Jets’ first home game, and four other playoff games played in earlier rounds.

Upper-level tickets for Sunday’s game have been resold for an average of $265 each. In the lower-level, seats behind the end zones have gone for $464 a piece, while seats along the sidelines have been commanding nearly twice that much at $845 per ticket. Right now on SeatGeek, tickets start at $224 each in the upper deck, but we’ve seen some fans spend as much as $2,200 per ticket on lower-level seats at midfield.

This kid should not be this popular. He just shouldn’t. Right?